Me Patra's surreal indie adventure game Pom Gets Wi-Fi is one of those games that makes you pause every so often and give your face a light slap to make sure you aren't hallucinating, and also makes you sound like a complete lunatic and a liar when describing it to other people. You play as a self-absorbed, foul-mouthed, pop-culture obsessed Pomeranian pup who wants nothing more than to spend all day (every day) on the internet, which might hit a bit too close to home for some of us. Things get, uh, complicated, however, and suddenly she finds herself stuck somewhere with no internet connection, and thus begins a quest to get hooked back up online. 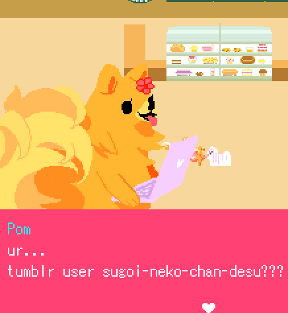 Use [WASD] to walk around, and [Z] to interact with things or dogs. To find Pom's beloved internets, you'll need to explore, examining everything and chatting with every dog you find. You can save your game by chatting with Dave Pointer, the swanky looking dog standing below the roses. Shibe, Pom's long-suffering yet bafflingly loyal Shiba Inu housemate, will tag along, and you can talk to him whenever you like to get hints as to what you're doing, or simply to deliver some more verbal abuse. Pom, you see, is... uh... acerbic in that special "I spend 99% of my waking time online" sort of way, which means she delivers a steady flood of profanity, insults, crudity, and pop-culture references to everyone and everything she meets. For some players, this can make her both unbearable and at times impossible to understand, and the unrelenting, cheery nonsense won't be to everyone's tastes... nor will the amount of back-and-forth running you'll have to do to complete fetch-quests.

But while Pom Gets Wi-Fi may be weird, silly, and immature, well, if that's your sense of humour, those are marks in its favour. The cheery artwork and sheer ridiculousness of everything means it's hard not to play with a smile on your face, and the baffled reactions of the other dogs, who also can rarely understand what Pom is talking about, never fail to amuse. It's not what you would call a hard game, though to get the second ending you might have to go against your basic gamer instincts a bit, and the few turn-based battle sequences likely won't give you any trouble since they're mostly for show. Pom Gets Wi-Fi is a crazy, over-the-top parody of both adventure games and online life in general, and it's even unexpectedly sweet at times... in its own bizarre way. It won't take long, but while it lasts, Pom Gets Wi-Fi makes an impression... just remember to get out n smell da rozes sumtimes, senpai, kk? <3

Find Someone Who Knows About Wi-Fi

Sneak into the Park

Find Someone Who Knows About Wi-Fi

Sneak into the Park

I played this because it reminded me of Missile the Pomeranian from Ghost Trick.

I didn't quite enjoy it. The combat sequences were too long considering you didn't really have any options.

There wasn't a whole lot of exploration to do, and Pom's commentary seems like it'd only be particularly funny if you're the sort of person who likes mocking others on the internet.

I feel like this could have been much better with more interesting characters and more things to see and do, or if it were just streamlined to eliminate the uninteresting combat sequences.

Oh my gosh, the Funyarinpa.
I never thought I'd see it outside of 999. XD
Thank you for making me almost fall out of my chair laughing, developer.

I think this game was intended for a specific audience. It has a ton of references to anime, other games, as well and Tumblr life and yaoi in general. Being a Tumblr fujoshi, I happen to be in the exact target audience and found Pom to be hilarious and relatable 100%. But if you don't get the humor and the references you might not find this game funny or enjoyable.