Flipline Studios serves up another installment of their addictive Papa's Series of simulation games with something sweet in Papa's Donuteria. You took the job for the sweet employee benefits at the theme park the shop is built inside, but when the rides break down, you're still stuck behind the fryer slinging dough and frosting to some truly exacting customer specifications. Having worked and managed a bakery myself for several years, I can confirm that there is no quicker way to get on the good side of someone who has been up since 2:00AM than to throw a fit because your strawberry frosting is off-center. As customers walk in the door, it's up to you and you alone to take their order, craft it down to the sprinkles, and serve it up before they get too impatient. Each order usually consists of multiple donuts, and each one has its own ingredients and decorations. You'll pick the type of dough and which cut-out to use at the dough station, fry and flip each one to golden-brown perfection at the frying station, and at the build station, you'll need to use the proper glaze, icing, and other sugary accoutrements before delivering your order to the proper customer. Your score, and thus your tip, depends on your speed and accuracy overall, and since you can spend that money on helpful shop upgrades, you'll want to develop a deft donut drizzle hand in a hurry. 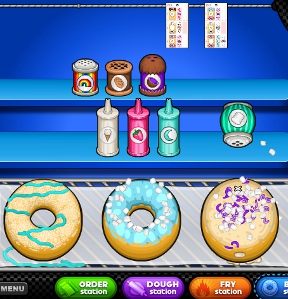 You've got to hand it to Flipline... they've been making the Papa's games for seven years now, and somehow they manage to make every installment keep the same style of gameplay fans love without making it feel too repetitive. Papa's Donuteria is one of the fiddlier games in the series, with each order consisting of different donuts with multiple different components, and even the order you place the donuts down onscreen is important. Like all games in the series, though things start out slow, they ramp up in a hurry, and suddenly juggling up to twelve donuts at a time that all need cooking and decorating gets a lot harder, especially since the little icon to represent a donut that needs a flavoured filling is easy to miss until you train yourself to actively look for it. Everything from evenly dipping to frosting donuts is harder than it looks, and you'll be glad when you can start affording some cooking alarms so you don't pop over to discover all the donuts you had frying for your angriest customer just burnt to a crisp. Sadly, the game chooses to break up the action by throwing in between level ads for other games from Flipline on iOS, and while wanting players to see your product is understandable, throwing the breaks on and a billboard up doesn't exactly endear. Papa's Donuteria doesn't significantly change the series's formula, but it provides a solid and fast-paced challenge with some eye-catching colour and all the charm you've come to expect.

IMO, the boosters are really useless. They actually made me lose points. Also, only buy the 1st and 4th alarms, because you're always cooking batches of 3.

Can't say I enjoy this, it's imho too fiddly and least in the browser the controls aren't very smoothe.

Sorry you're having trouble! I'm not sure what issue you're having with the controls without more information, since they worked fine for me on Firefox. :)

I can't say I like the racing minigame. The other cars always trap me in-between them so I drive headlong into an oil spill that gives them a big lead.

I love how one of the rides is called Jelly Roll 20X6.

972 Views
0 Comments
jayisgames.com— The latest patch to Shadowlands is shaking things up in the Mythic scene. There's a new affix at play, some of the older content is back, and a traditional shift in the meta is pushing players to try out new...  ...

988 Views
1 Comment
chrpa— Jayisgames needs your help to continue providing quality content. Click for details Welcome to Weekday Puzzle! The first and the second games are puzzlers - the one by Auroriax is Sokoban-like again about magical hats and rabbits - no...  ...