What would you do if you were happily serving up burgers at work when someone mysterious walks through the door and warps everyone to another dimension full of food that wants to eat you for a change? Of course you'd have to rescue them, which is just what you do in Papa Louie 2: When Burgers Attack! Use your platforming skills in Flipline Studios latest release featuring all your favorite Papa's characters. 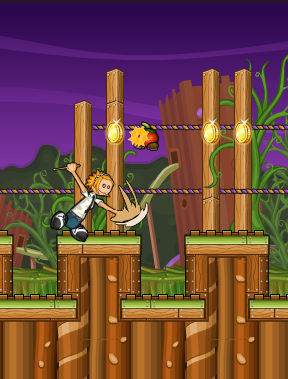 The controls are simple. Use the [arrow] keys to move and jump, and the [spacebar] to attack. When you begin, you'll be taken to the map. After you select a level, you'll see the character selection screen. On the left are the various missions available for the level, which involve saving people, among other things. You get to play as any customer you rescue. Some of them have special abilities, and you'll be told the first time you use them how to activate their specialty. Take note that you can't complete every mission with just any character, because some areas of the map are accessible only to those with a certain ability. That means you'll be replaying levels, but you'll also be exploring new areas within those levels, so don't worry about too much repetition. There are checkpoints you hit along the way, so if an angry burger overwhelms you, you won't have to start the level completely over.

Papa Louie 2: When Burgers Attack! is pretty standard as far as platformers go. That's not to say there isn't a lot to love. Playing through the brightly colored levels gathering coins conjures images of Mario. You'll find yourself smiling as you encounter the creative food themed enemies ranging from lettuce birds to pickle worms, and the various weapons the characters use help keep things fresh. With 28 customers to unlock spanning nine levels, plus badges to earn and costumes to purchase, there is plenty here to keep you busy for quite awhile. Now go teach food who's boss!

This looks like it came straight from the 90s!

Engaging game. Great, fun graphics. Only wish there were a map to use during the level, although that might make it too easy...?

@Dandy: You don't think it looks 90s-ish? I could swear I played more than a couple of platformers with that food/fastfood setting on my 16 bit consoles.

Anyone know how to get past

the bacon on level 7

Never mind, I figured it out... you just

I agree it has a definite 90's vibe. And that's not a bad thing!

I need some help with Level 5, specifically two of the challenges.

You have to kill all 8 of the big burger monsters on that level, but I can only find 7, 2 on levels 1, 2 and 4, so I believe I should find two on level 3 as well, but only got one. And I've been gliding all over the place in an attempt to find that last one.

The same goes for those larvae you have to find. There should be five, but I have only ever seen four which I have collected.

Hmm, I'm having trouble finding a fifth worm on level five as well. I'll let you know if I figure it out!

Did you find this one?

On the second screen shortly after the checkpoint there are two purple balloons. Ride the second one down as far as you can and you'll notice some crackers on the right side. Pound them (there's a ledge that will catch you) and there's a worm in there.

Yeah I know about that one. I've spotted them all five now, but I can't see how to get down to one of them. I'm more concerned about the last Burgzilla though.

I'm hoping the power of posting will help me with this.
I'm struggling with

the Boss on level 4. I cannot for the life of me get past him. I'm finding it such a struggle with only three life chances. I've tried multiple characters each with their skills.

The melee characters like Rita and Akari are just not strong enough.
I can't get my ground pounders close enough to Sarge to jump on him before being hit by his pepper bombs or himself.
Boomer with her glide ability hasn't been an advantage for me either.
The closest I've come to getting anywhere decent is with Mindy (hairdryer).

If anyone is able to post what worked for them, I'd be so very grateful.

I used one of the main characters, with the spatulas. You don't have to jump on him to defeat him, just to hit him three times.

First time he throws pepper bombs, as soon as he's thrown one move in close to him and hit him. Now he starts rolling, just wait for him to finish rolling while jumping over him, and some balloons will pop up and he will start throwing bombs again. Hit him again and he will start bouncing like a basketball, so just run underneath him when he gets close to you. More balloons, bombs and that's when you hit him a third and final time.

Themepark:
Thanks heaps, the advice worked! :)

Need help finding all five soda cans on level 7. I can find four, one on each sub level but can't get the fifth.

All the worms on level 5:

Watch for the very first crackers you'll come across. Ride the balloon up til you find the worm.

Shortly after the checkpoint there are two purple balloons. Ride the second one down as far as you can and you'll notice some crackers on the right side. Pound them (there's a ledge that will catch you) and there's a worm in there.

Watch for a worm crawling between some pretzels with a couple of swinging guys above him. Walk left, break the crackers and ride the balloon up.

After the second checkpoint there are a lot of mushrooms. After you pass them there are some crackers. Break them, then go left.

Break the crackers right after the 3rd checkpoint.

Thanks Kimberly, must've been that blasted worm in Stage 3 that I missed. Now if I could only find the missing Burgzilla...

@Greg Sheffield:
Yeah, the last one is well hidden.

I found all 8 Burgerzillas for level 5. I'll do my best to describe this.

Ride the first balloon up to the cliff. There is a Burgerzilla to your right on the main path.

After you clear enemies, turn back to the left and glide off the cliff and land on a smaller balloon. Ride it up to find another.

Instead of going up, go straight and glide across the chasm to find a burger there.

One on the main path after the balloons.

There is on on the path after all the mushrooms

One on the main path above all the swiss jacks.

After the checkpoint, ride the purple balloon all the way up, then glide left. There will be a burgerzilla on a pretzel ledge up there.

Continue to the right and there is one on the path after some more swiss jacks.

Thanks, Kimberly! I was expecting the last one to be on Stage 3 so that's where I had focused my search. Turns out I was missing the second one you mention on Stage 4.

I'm having trouble finding all the cans in level 7. Any body find them all?

On level 7, there are 4 cans you use glide to get, but the fifth one is underground. When you get to the two waterfalls with the red balloons and the bacon strip, sink down all the way and you will find the fifth can

On level 8, i am missing a burger. i found 3 on the first part, 2 on the second one, then 4 on the third and 2 on the last : somebody knows where the last one may be?
As for coins on the same 8th level... how do we get the coins that are very high at the end of the second part? (after the pits with the pink Jellybacks)

Farine-Elie, you use the glide skill.
If you jump from the right-most jellyback, then use your glide, you will find a sausage platform that can be used to get the coins.

Have anyone found the customer in level 8 who is rescued with "W" skill? He's is the last one left in my game :(.

I'm having trouble finding (and getting) all the coins on levels 7 and 8 can anyone help?

I cant find the cans on level seven i have one on the first screen two on the second and one on the last. Where is the other i am looking for?