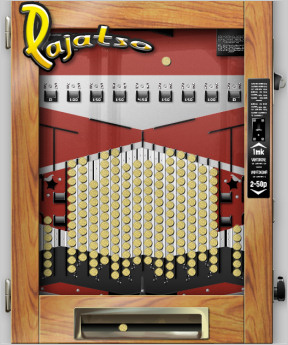 Pajatso is a Flash interpretation of a traditional Finnish gambling game that dates back to the early 1900s. The object is to flick a coin into one of the winning slots. If you succeed, the machine drops a few coins from the columns below. If you miss the coin rolls and adds itself to the stack. It's a fun and simple game perfect for frittering away a few minutes of your time.

This incarnation of pajatso is just about as bare-bones as you can get. To throw a coin, hold the [left arrow] key and release. The longer you hold it, the farther the coin goes. That's it for the gameplay! There's no music (other than title music and a victory fanfare), and the only sound effects are from coins dropping into the tray below. While the game does keep track of coins you throw and money you earn, there's no over-reaching goal, just mindless coin-flicking entertainment.

UPDATE: Pajatso now has a mellow ambient music playing in the background while you feed the machine your tokens.

The game is simple, but there's one little catch that can frighten players away: the entire game is in Finnish. Don't worry, though, as the only time you'll need language is when you click on menu items. Here's a quick rundown of the game's modes so you know what you're getting yourself into.

Harjoittelu - Practice: Play as much as you want. You can see your turnout ratio in percent in the upper right corner.

Rahapeli - Moneygame: You start with 5.00 mk and keep playing as long as you have coins left. Winnings go straight into the playing pot.

Turnauspeli - Tournament game: Start with 40 tokens and try to win as much as you can. When your 40 coins are gone, the game is over.

And in the game interface there is a button uusi peli for a "New Game".

Cheers to Vike91 for recommending this in our IRC channel (UPDATE: and for alerting us to the new version!) and Thomas for reminding us!

good looking game, difficult to understand at first, but could possibly be addictive.

I'd wish it would be this easy in real life.

And as a Finn it's always so fascinating and weird to see something so normal for me made to look so exotic.

But thanks once again to jayisgames for brightening up my day. :D

I would love to own a pajatso machine if this is the way they work... You would make a lot of money off of people if you placed it in the right place.

Hey, they even rigged the center hole just like they do in the real machines! It's like, 5 times harder to hit it because the hole is smaller even though you can't see it. Ah, this brings me back.

Rigged the center hole? I've pretty much emptied out the center ones now... I think you're just not very good at it ;) /jk

But seriously, There's like three coins left (mostly from me messing up)

um what am I missing here? I can't get a coin to throw. I've tried all three kinds of gameplay, clicked all over the screen.... how do I get it to start? Do the levers or coin slots do anything?

Is there a strategy of any kind? (apart from aiming at the high paying centre slot)

So far, just firing coins at random seems to get the same return as trying to target a particular slot.

Also I seem unable to hit the same power level twice in a row. Maybe my left-arrow pressing skills are weak ...

You may need to click somewhere on the flash animation to capture the "focus," so that the flash anim will receive keyboard input.

This game reminds me of pachinko, and Peggle by extension. Do the Finns really still play this game with physical coins?

Yes this is. Look here http://www.ray.fi/inenglish/pelitoiminta/peliautomaatit/pajatsopelit.php?l1=6

Neat game. Does anyone know of any online "coin pusher" games? That would be neat. You know, the kind you used to see at carnivals with all the quarters and you put one in and it drops a bunch off the edge.

Hello. I'm one of the Nostalgiapelit flash team.

The game "simulates" machine from 1960's. There are still similar games in Finland but electronic. They pay winnings electro mechanically. Newer models has small TFT-screen and sound effects. Here are some models shown from history to present day:

Someone suggested us to make a pusher game but we noticed that kind of game would be quite difficult to make. Though, we could try some day. I personally love the coin pusher machines but I haven't found any from the net. There is something same in pajatso games. You can see the winnings behind the glass and you have a possibility to affect them with one coin. So near and still so far...

If the game is not responding in Internet Explorer, you can try to click the somewhere in the game so the flash will activate and then flick the coins with the left arrow key. There is a javascript solution to that IE flash problem but we haven't added that yet. Common problem.

i cant throw coins either! my keyboard doesnt work for anything anymore! i am using firefox on a mac. help?

hey, it works now! i only had to restart my computer about 7 times! yay!

My friend just found and purchased a 1958 Pajatso (payazzo) machine in great shape. It is very cool to play. We are both wondering what this machine may be worth??? Has anyone found a site that may give a value?

what's the value of the bonus that you get every once in a while in voittopeli?

Yep, looks like they moved it. Links have been updated. Thanks for the note, Ville!