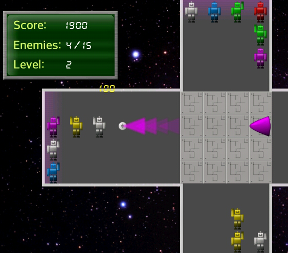 In Oh Noes! Robots! you play as a tiny person who's escaped to their ship and is surrounded by waves of advancing robots. You move around a 4x4 grid by tapping where you want to go, and fire by tapping outside of that square in the direction you want to shoot. Each laser you fire is the same color as your ship. If the robot you hit is also the same color, the robot goes boom, never to be seen again. If not, then the ship and the robot swap colors. You can use this to great effect by lining up multiple robots of one color and then getting rid of them all at once. You can also collect power-ups to use later; these can eliminate lots of robots at once or help arrange the robots so they're easier to kill. If you can't make a move, tap the [+3] button to summon more robots, or just wait until more start appearing. But if even one robot makes it to your area, it's game over for you.

Oh Noes! Robots! is a simple idea that's been implemented very well. It's one of those games that's exactly what it says on the tin: it doesn't add extraneous features or complications. The control scheme is easy to learn, the graphics are as polished as retro-style pixel graphics can be, and the power-ups keep it interesting. There are multiple difficulty levels to suit your reflexes. The only thing missing is a handsome man with a bow-tie and a police box to keep you company.

This is a shameless ripoff of Zoop! for the SNES. They didn't even bother to change the size of the grid or the number of colors.

4,758 Views
1 Comment
chrpa— Jayisgames needs your help to continue providing quality content. Click for details Welcome to the Roundup 38 with three games! As mentioned in the previous roundups, only odd-numbered episodes are featured since even-numbered are for Robin Vencel's patrons. More...  ...

2,990 Views
1 Comment
chrpa— Jayisgames needs your help to continue providing quality content. Click for details Welcome to Weekday Puzzle! In xalezar's puzzler you start in a fairytale land with Jack trying to climb a bean stalk. Then in Thomas K. Young's platformer...  ...