Sometimes, the control scheme of a game can make or break it. If it's too complex or simply not intuitive enough, players might get frustrated. If that sounds like your story, then Mystic Mine will be your kind of game. Its controls couldn't be simpler (just one key does the job), but the game is by no means simple. A true challenge awaits those who enter the mine's dark depths. 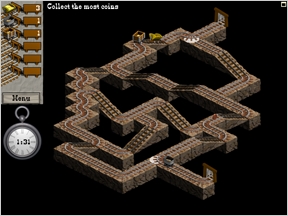 Mystic Mine is a track-switching action-puzzle game. Much like classics such as Candy Train and the current iPhone offering Trains, you must switch tracks ahead of your mine car, which is always in motion. The goal for each level varies, but most common will be the collecting of coins scattered throughout the mine. Collect enough coins before the clock reaches zero and you'll advance to the next level.

Later levels will have you collecting diamonds, racing to flags, and trying not to get blown up by dynamite. And you won't be alone in the mines. Computer controlled mine cars will enter into the fray with you, in an attempt to keep you from completing the level. They will try and pick up coins before you can. They will also try to steal diamonds before you can deliver them and pass off dynamite so it is you, and not them, that is left with a charred surprise. Bump into another mine cart to pass an item along. This often results in frantic passing contests, especially when done near an incline.

Yes, like any good mine, there are inclines and declines. But, lest we forget, this is a "mystic" mine. In this mine, you can always go down, if you so choose. This is accomplished by using a graphic technique not unlike M.C.Escher's Ascending and Descending, assuring that there is always a downhill path to keep your cart moving.

By far one of the best features of Mystic Mine is the party-style multiplayer mode. Up to six players can play at once, each using a different key on the keyboard. These games are truly frantic, as six cars bounce around the screen at once, all trying to accomplish the same goal, all the while passing dynamite, stealing diamonds, out-racing other mine cars, etc. 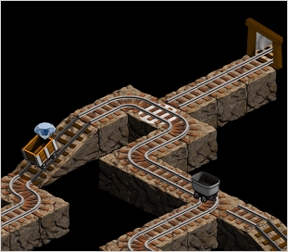 Analysis: In a gaming world where it seems that complex means better, Mystic Mine comes along and kicks you in the head with its utter simplicity. There are no complex puzzle patterns, no stealthily hidden objects to find, no impossibly complex rooms to escape. It's just you, the mine cart, and the switch. Making your way around the mine to collect your bounty may seem like a simple proposition, as well, but when you figure in the fact that you can only use forward momentum (i.e. you cannot throw your cart into reverse), and the fact that you may have to take a path around the entire mine to get from point A to point B, doing so before the clock runs down suddenly seems like a daunting task.

There is a lot of strategy to be discovered here, especially when it comes to outsmarting the computer-controlled mine carts. The primary strategy is, of course, to switch the tracks before they can and send them off to another part of the mine. This requires good timing, though, as the AI carts can often re-switch the track before you have time to respond in kind. Another useful strategy, especially when trying to pass off dynamite or to steal a gem, is to get them caught on an uphill slope. With a couple of exceptions, carts cannot go uphill, and will come back down before reaching the summit. If you are behind the computer, you will bounce off each other, the switch will be made, and you can make your escape.

I really like the use of the M.C.Escher optical illusion to ensure that you can always go downhill. If there was a point where you could no longer reach a particular part of the screen due to a missed turn, they game might get frustrating. The fact that everything is always downhill from everything else makes it easy to concentrate more on getting to the treasure and less on whether you're going to get stuck somewhere.

The graphics, sound, and gameplay of Mystic Mine are all excellent. The three-quarter perspective pixel graphics give it an old-school feel, but the entire game is really an homage to old-school gaming, where it was more about whether a game was fun than whether it had the best graphics or the most complex concepts. Grab a key, sit down, and take a mine cart for a spin.

Hi Marcus, I'm the developer of Mystic Mine and I just came across your great review! Thanks for you positive comments :). You are indeed correct that the game has an old-school feel to it. I didn't create that intentionally, but since I'm an old school gamer myself with some great memories of those early games, I probably steered it in that direction. My next game will definitely also have that feel to it, but you'll find out about that soon enough ;).

5,855 Views
5 Comments
chrpa— Jayisgames needs your help to continue providing quality content. Click for details You find yourself on a deserted island, you still have your small boat but the oar is lost somewhere - what now? Sounds familiar? Yes it's not the...  ...