Mike Shadow: I Paid For It! 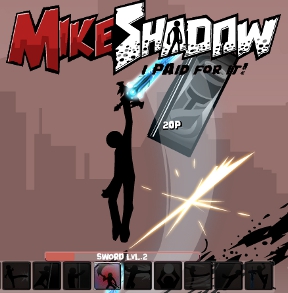 The age old struggle of man vs vending machine is about to get a whole lot more brutal thanks to Tanoku's ridiculously over-the-top arcade game of man-on-machine that just sits-there-and-takes-it violence, Mike Shadow: I Paid For It! After being stiffed out of a tasty beverage that was rightfully yours one too many times by the callous, uncaring vending machine, you (that is, Mike Shadow) have finally had enough and are going to unleash one heck of an unholy beatdown on its smug, plastic buttons. Your available skills and powers appear as buttons at the bottom of the screen, and all you need to do is click on one to activate it; using these uses patience, which also begins to tick down after your first strike, and when that runs out you'll have to quit, but if you can build up your stress level enough with each hit you'll be able to activate special moves that really bring the pain. Try to last as long as possible and you'll earn high scores and cash that you can spend on the extensive upgrade shop to unlock bigger, badder, and weirder abilities. Maybe there's even a special Anger Management Therapy mode you can unlock! Because, well... it's a vending machine.

I Paid For it is weird, no doubt about it, but it's that weirdness that helps it stand out from the pack. There's no real goal other than to get the biggest high score you can, and the game provides you with an impressive stable of upgrades to do it in the most spectacular fashion possible, with some top-notch animation to carry it all through. The downside is that it can be fairly repetitive and take a lot of grinding to unlock the most interesting stuff, especially since cash can be so infuriatingly random to appear even with the chance upgraded. It wouldn't be so bad if you could chain moves together, but since you have to wait for the attack animations to end before you can click a new skill, you'll be doing a lot of thumb twiddling that interrupts the flow of gameplay. (And if you played Final Fantasy 8, you're probably having Guardian Force flashbacks right about now. Look, we know you're the earthly manifestations of infinite, unknowable magical forces, but would it kill you to move with a bit of expediency?)

While Mike Shadow: I Paid For It! at times feels a bit more like a webtoy or spectacle than an actual game, as a means of catharsis for anyone whose Kit Kat has ever been withheld by the cruel machinations of the snack industry, it's virtually unmatched. It's also stylish, weird, silly, and entertaining, and chock-a-block with a staggering array of weapons and special abilities designed specifically to help you indulge your taste for vending machine carnage. Keep your eyes peeled for the upcoming movie directed by Quentin Tarantino and starring Kiefer Sutherland as a man on a mission and Gary Oldman as the vending machine who wronged him.

Play Mike Shadow: I Paid For It!

My biggest issue with the game is a lack of a pause button. I just had a 38 minute stage... And I don't have the last patience upgrade or the full CD reset button yet.
Strategy tips under the spoilers.

Generally the most important thing is cost per duration. The lower it is, the better a move is. If you can get your costs low enough, you'll last a long time with the cheerleaders. Note that the 40% cheerleader with a 5 min cd is fine, but it is worse than the other two due to the CD (likewise for the stress ones).
My setup for the 38 minute attempt below.

All 3 cheerleaders, Ranged Weapons 3, Push 3, Cavalry, Scythe of Death, Mecha, and Overtimes 1&2 [for duration games rank 3 is worse since it's less stress per time]. With 900 patience and 90 stress maxes I was able to last 38 minutes. With work on my setup phase and the last patience upgrade I'm pretty sure there would be no limit to the score you could get.

it's a pretty fun game, even though I live where there's no vending machines. 5/5 for epic moves.

By duration, do you mean flat cooldowns, or are you also including the duration of the actual move (which is not a provided statistic)?

Duration of the move, not cooldown. It takes a bit of trial and error to find, and there are probably better moves I'm not using because it's not given.

Is anyone else getting a fatal exception crash when they click the "Bonuses" button?

Well, I don't know about the endgame potential of your proposed strategy, Phil. I understand that you are suggesting an infinitely long chain, but I'm interested in what the final score of your 38 minute run was.

The score output for the method is rather low, and in unsustainable cases (ie. at lower levels of patience and stress), it is not as profitable as standard damage-per-patience calculations. I am getting more returns on standard optimizations using 3 Cheers, Overtime 2, Combo 1, Fire 3, Ranged 1, Mecha, Around The World, and Reaper Combo.

Admittedly, Ranged 1 and Reaper Combo are merely there as cheap fodder to pass time, and could probably be replaced with more effective cost-per-time moves. And if the infinite-combo pans out, damage output is of no concern. But I must suggest a standard damage-per-patience approach to the beginning and middle of the game.

Man, you really need to be able to turn off the music without turning off the sound.

Well I just broke 100k, I dunno if that's impressive or not since it's an achievement, but I did it.

The mecha is actually White Glint from Armored Core: For Answer.

I found it's best to emphasize moves that do more hits over more damage if you're going for money, since it rolls the money chance for each hit. I've made a lot of cash from chaining moves like Water 2, Katana 3 and Combo 3 with Show Me The Money 3.

I suppose the problem lies in the fact that once you find a setup that works for you, you settle into a routine. I myself haven't changed from my routine of SMTM3- Katana 3- Water 2/3- MECHA- Anything since I unlocked them since it makes at least 1000 each time, and I don't have enough monies for any Premium moves, Specials or Patience/Stress upgrades.

My current moveset is pretty basic, but highly effective; I'm just starting to calculate how to maximize my score instead of my money.

That nets me about 25,000 cash per round in the course of about 6 minutes. Now, on to the score-maximizing part of the puzzle. :)

How did you get FIRE III twice on your skill bar?

The time just passed and he could just use the move again Dentist,isnt that simple?

I'm not sure about your number of hits to amount of cash theory, Mattie2010. The highest number of hits in an attack I've encountered so far is 69 with Combo Lvl. 3, which as I've tested, gives me only around $100 with Show Me The Money. Then there's Sword Lvl 3, 44 hits, which gives me around $150.

Also, according to the tips and tricks: "Improving critical chance affects directly money and stress gain!"

You can squeeze some more points out of Essence's strategy by replacing Show Me The Money with Overtime 3, popping the Deep Impact immediately after the first Fire III, and putting a Nuclear Strike just before Time Hollow. Additionally, at maximum Patience, you should have no problems squeezing in an additional Fire III and Thunder III.

That resulted in 103,271 points and ~14k money (including the bonus for breaking my previous best).

If a hit is critical, dealing more damage, it will produce more of whatever you'd want, yet again.

Now obviously there's something to be said for the number of hits in a move vs. the power of the move. But since the moves generally scale upwards in both hit number and strength (there isn't a higher end move that takes a long time and deals thousands of hits with LOW damage), the argument is less worthy.

And since the game moves towards long routines and grinding them anyway, I'm getting the feeling that as long as you're getting a fair chunk of change each time (before full purchase score optimization) you shouldn't worry about it too much. Maybe even change it up to see Mike beat the machine up in new and interesting ways.

Ahem. According to my calculations, Fire Level 2 has the highest average damage per patience used, at 6.88; Fire Level 3 comes in second at 6, and third is Fire Weapons Level 3 at 5.92. I highly recommend Kick Level 1 whenever you need a go between, as it has a high ADPP and a quick recharge time, good for those in-between times where you need an extra stress.

I Just scored 109,800 and though its only 39th place,
it was stil worth a golden medal but dont ask me why.

i have combo but its not complete yet though it got me about 110,000 points but still if you try to play with it a bit you will surpass my score.

note that i didnt use "Show me the money"

Use in this order

Can definitely confirm it is possible to play a limitless game with a small tweak to Phil's setup on the first post. One warning however, it is really, Really, REALLY dull. Got to 155k after an hour or so to prove my point but the only bar is your patience.

can't i sync my newgrounds data to mochi games?

I'm having a bit of a "save" issue. I play the game through the Jay site, but signed up for Mochi so I'd be able to save the game and play it on other computers. Psyche! It apparently doesn't work that way (I just assumed it would work like GamerSafe).

So...is there a way for me to transfer the game I have saved on one computer to another? I've been playing it at work!-- :D --and after Thursday I'll no longer have access to this computer.

Non of those work for mine, MY best way is to use all of Lvl. 3, starting from lightsaber Lvl. 3, going up down up down until full.
Not much of a spoiler...

Not much of a spoiler:
I don't think you actually beat the game, I think you just go on forever...

Not much of a spoiler either...

If anyone else has seen the movie, does the lvl. 3 balls attack remind anyone of "Shaolin Soccer"?

Hey,is there anyway to save game?Because whenever I restart my comp,it starts from beginning again.

7,805 Views
3 Comments
chrpa— Jayisgames needs your help to continue providing quality content. Click for details Hi! Weekday Escape is here! We'll start with a short but sweet game from giucalistro. Next up is a game from TRISTORE, which is a very successful...  ...

4,783 Views
0 Comments
jayisgames.com— Are you looking for a fun and entertaining way to pass the time? Solitaire card games are the perfect option for you!...  ...