Legend of Dungeon is a hybrid game from RobotLovesKitty that takes a roguelike and fuses it with a sidescrolling beat-em-up. While that may sound like mixing peanuts, cayenne peppers and bubblegum, the end result manages to take the best from both genres and leave you happily content adventuring through your dangerous but loot filled dungeon world. Just don't get too angry when you realize death in this game is permanent. 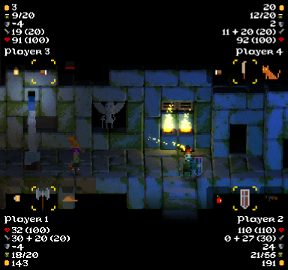 There's a treasure deep down in the catacombs. Most agree it's on level 26, but there's only one way to find out for sure: send in a motorized drone! Actually, that won't work at all, so instead it's time for an old fashioned adventure. Get your character, starter sword in hand, and head out of the tavern to start your journey. Controls allow for weapon attacks, item uses, and short jumps to climb on top of blocks, but otherwise it's all about waiting for the right moment before making your move.

The roguelike part of Legend of Dungeon gives you loot, gold and experience for defeating enemies, allowing you to level-up so you'll have a slightly higher chance of staying alive. You'll find several traps and puzzles strewn across the dungeon floors, many of which require patience and persistence to solve, just like any RPG. The more action-oriented part of the game sends swarms of bats and skeletons and other baddies at you on every floor, along with pools of lava and shifting platforms that threaten to end your day. It's no easy task to stay alive in Legend of Dungeon, and fighting your way to the 26th floor is going to feel like an impossible challenge. 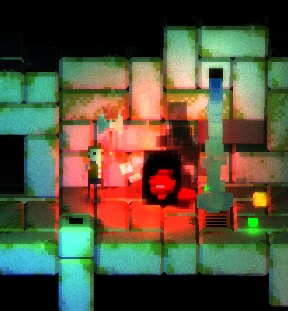 Analysis: Legend of Dungeon isn't for the faint at heart. By that we mean you're going to have to do some work and endure multiple failures in order to slug your way to the end. You have to learn to play aggressively but intelligently at the same time, no fair running in with swords swinging. Your rewards are few but they feel like a gift from the gods when they arrive. And if you happen to have a couple of friends around, the local co-op mode is definitely worth playing!

You can't go talking about Legend of Dungeon without mentioning that gorgeous dynamic lighting. Way better than a simple dark and dreary dungeon, the floors are lit from a number of different sources (including your very own lamp!), creating moving shadows and genuinely creepy settings. That alone justifies the 2.5D perspective, and seeing the game in motion is a real treat.

At the time of writing, Legend of Dungeon is technically in beta. It's available to purchase, however, and the RobotLovesKitty is promising a demo in the near future. After its successful Kickstarter fund and all the attention surrounding its development, it's nice to see the game is every bit as fun, challenging and addictive as as we had hoped. Each playthrough is different from the last, and new items and enemies seem to crop up when you least expect them. It's an adventure in every sense of the word!