There are few realtime strategy/tower defense games that achieved the sort of massive success of Ironhide Games' Kingdom Rush games. Kingdom Rush Origins, now available for iOS and Android, is still a Kingdom Rush game, which means a lot of tiny little heroes and monsters duking it out with adorable Adam West Batmen sound effects. You build and upgrade towers of different types at build sites along the pathway, trying to prevent enemies (who drop the loot you use to create your defenses) from reaching the opposite side of the screen. You've got your spells, which can unleash handy destruction but come with a cool down tiner, and your powerful hero unit, who can level up and learn new skills and always respawns after a time. How well you handle a stage you've won determines the number of stars you're awarded, which can be spent on permanent upgrades for tower types and abilities. Some enemies drop gems that can be spent on single-use power-ups, for when you need that extra bit of devastation. All of this should sound familiar to fans, and indeed if you've been with the series from the beginning, you'll feel right at home. But while the gameplay hasn't really shaken things up much, Kingdom Rush Origins is what you've come to love with its muscles oiled and polished until you can see yourself in them. 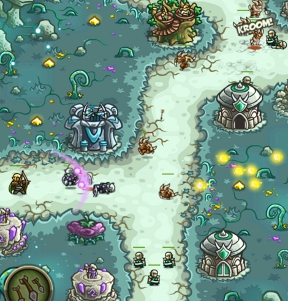 While the mechanics are the same apart from some swaps like the loss of the Dwarven Bombard tower in favor of a Druid type that deals the same sort of splash damage, Origins has clearly spent a ton of time and effort into crafting new environments and enemies. Stages in Origins can be very unpredictable, with enemies finding shortcuts and new spawn points appearing when you least expect it. It makes for a game that feels a little more dynamic than your typical tower defense, offering more difference between levels than simple path layout. It helps keep things feeling fresh, living up a familiar formula with great touches, though Likewise, levels are also filled with things you can tap on to help you out, such as magic plants that attack anything in range, or simply make you grin a bit, like the topiaries that pay homage to classic games. The types of enemies you encounter will vary depending on where in the game you are, and their different abilities will keep you on your toes. There are massive spiders that can web up melee units, huge faun creatures that can summon more underlings and magically fly across impassable terrain, and much more.

The difficulty feels like it's at a gentler slope than previous games on "normal" mode, though the infrequent "boss" monsters have such abominably huge hit point bars and the ability to instantly give you a game over if they reach your base that they feel like using the power-ups is a necessity. That said, while you can buy more gems for power-ups out of pocket via in-app purchases, you're usually awarded around two hundred or so on most stages, so there's still not much pressure to spend an extra dime. None of the in-app purchases are necessary to complete the game, though of the currently nine available heroes, only three come with the game, and the others can only be unlocked with cash, which is a lot unless you want to look at it as supporting the developers as you certainly can, as Ironhide have never shirked when it comes to quality and content in general. It's a beautiful, beautiful little game with tons of charm and style, and while you may know what to expect by now, Ironhide Games has clearly put their shoulder to the grindstone to deliver it in as stylish and engaging a package as possible.

Batmen sound effects. AKA the sound of Batman fighting against one or more clones ;)

Bummer this didn't come out on flash first/ at the same time, but I guess developers gotta eat too. Also Ironhide puts out pure quality every outing, time and again, so I guess it's pretty understandable.

Only question now is: Should I clear memory on my phone for this? Do I really NEED all these pictures of the cats and dogs of my friends on my phone?