The Jelly family, including Jellydad, Jellymom, and Jellykid, were on their yearly summer jellytrip, when some not-so-friendly space-pirates used their space-plungers to plunge their Jellyship right up! Now Jellydad, separated from his family, must traverse the pirate ship, find his family, and get them to safety... preferably the safety of a tropical resort on a beach planet. It's Jellydad Hero, a puzzle platformer from Snail Bob creator Andrey Kovalishin, and other developers might indeed be a little jelly, baby. 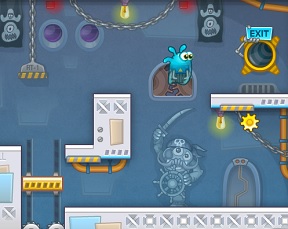 Walk and jump using the [arrow] keys, attempting to make your way to the exit in each level. You can manipulate objects on the ship using [spacebar], as well as absorb certain items and place them where they'll be useful. There is the usual menagerie of baddies, lava pits, spinning blades, falling platforms and bombs to avoid or deal with, so watch out. Also, in each level are three gears that can be collected. Collect enough of these gears, and you'll unlock special bonus levels. Complete all 30 regular levels, though, and you'll save both your family and your vacation! Fans of Snail Bob will find a lot to like here, as Kovalishin gracefully transfers his puzzle genre work from point-and-click to platforming while retaining many of his trademarks: the physical comedy, the soft layer of not-too-difficult challenge, bounding cartoon art, and music that crosses the line into aggressive cheeriness. Jellydad himself might not be quite as charming as Snail Bob (even if he does share the somewhat frustrating slow movement speed), but the imaginative levels are well designed with a lot of cute inside jokes and callbacks sprinkled throughout. In short, Jellydad Hero is, appropriately, a Peanut Butter-and-Jelly sandwich kind of a game: a little familiar and kiddy, but definitely satisfying and a perfect complement to a lazy afternoon.

Super cute and VERY playable game, it's a bit of a weak end for completing with all stars though.

Unfortunately, the lag by the time you get to the last level leaves it unplayable. Too bad, as it's a fun little game, as are most of Andrey's games.

Word of advice: if you see an ad after playing a level, refresh the game before continuing. Otherwise, the music will be broken.

I can't say as I encountered any lag at all whilst playing this. Oh, and massive props for all the Snail Bob references in the background.

I had a lot of lag issues as well*. I cleared and refreshed a couple times to get to the the end. The end itself was frustrating; beating the boss was do-able, after a string of deaths. But even though I got all the stars/gears, the level froze after the family flew off, and when I went to the level menu I'd scored zero stars/gears. I'm sure I could have gone back and tried again, but it was past my bedtime. Did I miss anything for scoring perfectly on every level?

Fun timewaster, it does get a bit impossible (for me at last) near the latter third of the game.
There's one minus, the music gets disjointed and stuck on a short repeat loop after a while - it's like having half a jingle droning on and on.
The option to turn off the music, but leave the sound effects on, would be brilliant.

Everything You Need to Know About Cribbage

4,199 Views
0 Comments
jayisgames.com— One can play Cribbage with two or four players, but it's best if two players play. For the game, a complete set of 52 cards is required where the Ace has the lowest value. Once the deck of cards is...  ...