So you've broken into the bank, escaped from prison, and stolen the diamond, and the government has finally took notice. However, they're willing to cut a deal: the Toppat Clan of international thieves has been a much larger problem that you for quite a long time. Get some evidence, and they'll give you a full pardon. And to do that, you must start by Infiltrating the Airship. The fourth in the series of Puffball United's popular series of stickman-style humorous adventures, Infiltrating the Airship keeps the laughs coming and the awesome occurring. 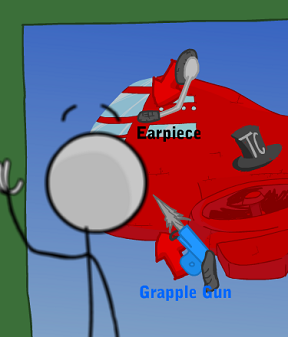 As in previous entries, infiltrating the Airship is set-up choose-your-own-adventure style. An animation plays, and every so often you use the mouse to make a choice as to what your stickman avatar should do to proceed. Most of the decisions you can take your time on, though a few are quick-time events just to keep you on your toes. There are four ways to victory, sixty fatal fails to find, and a host of clickable secrets. There's been sort of an online backlash against the sort of random comedy that Puffballs United happens to specialize in, but Infiltrating the Airship shows that when it's done well, there's nothing more hilarious. The pop culture references come as fast as the frenetic physical comedy, and while the addition of voice-acting takes a little getting used to, Infiltrating the Airship is perhaps the most fun repeatedly killing a stickman ever has been.

(Note: Each spoiler below contains a list of the decision points along each route, and your options at each one. Options in bold will lead to progress; options not in bold will lead to fails. "Nothing" means wait a moment without making a choice. Options marked with asterisks* are related to medals, and will be further explained in the "Medals" section below.)

(Note: "Make an animal noise" is neither a fail nor progress. It just brings up the same choice again. It does earn you a medal, though.)

The ending and fail medals should be self-explanatory, and I covered the Biggoron's Sword above, so here are the others:

Thanks, SonicLover, for the walkthrough

I cried out with joy when I found out Puffballs made another one of these games, & I honestly was not disappointed. As always, the voice acting & animation were top-notch, & the fails are so funny that it's actually a little disappointing whenever I make the right choice on my first try.

Looks cute, but requires sound up or you have no idea what's going on in the beginning. Too bad, I was really looking forward to playing.

I had no trouble with hearing the beginning dialogue.

Now if only someone could figure out how to get some of the more obscure medals.

I'm sure I could have heard it fine, too, long-http-not-a-screenname-commenter. My point was that I play without sound, so a game that requires it is automatically unplayable for me. I'm not alone, and most game devs know that. Heck, even the recent game about an orchestra could be played without sound! I don't think it's too much to ask for subtitles.

I had honest bursts of laugh while playing this game, particularly in a part where it said "here comes charlie"

A whole game of that Sierra-on-line brand of comedy where you get punished for guessing wrong.

(Note: Each spoiler below contains a list of the decision points along each route, and your options at each one. Options in bold will lead to progress; options not in bold will lead to fails. "Nothing" means wait a moment without making a choice. Options marked with asterisks* are related to medals, and will be further explained in the "Medals" section below.)

(Note: "Make an animal noise" is neither a fail nor progress. It just brings up the same choice again. It does earn you a medal, though.)

The ending and fail medals should be self-explanatory, and I covered the Biggoron's Sword above, so here are the others:

Thanks, SonicLover, for the walkthrough

Do people play without sound because they're at work or something and can't use it, or is it some other reason?

� the key and the flash drive, and I've read Secretdoc.txt, but I don't know what to do with the code. Anyone know?

If you haven't found it, the key is on the desk right after you get in with the grapple gun, the flash drive will be on the metal plate in the vault if you've freed the guard, and you can read the flash drive when you get your choice of disks at the end.

Never mind, I figured it out.

You enter it on the keypad near the start of the earpiece rout.

DAM - I usually play without sound because my family all sits together in the living room and putz online separately, with an assortment of tablets and laptops. It annoys me when someone else is listening to (what I think are) random noises while entertaining themselves, so I don't usually subject the other members of my family to my random (to someone not playing the game) noises.

If we were all listening to our sounds, we'd have a cacophony of random sound effects from LOLZ cat videos from my daughter, cows mooing (and pigs oinking, creepers creeping, and random digging noises) from my son playing Minecraft, the random noises from whatever game I'm playing at that moment, my wife's human interest stories from CNN's web page, and the TV playing in the background.

Have you ever heard of an invention called Headphones?

All I can think about now is CrankYanker's family and how they'd react during a power blackout.

Roytheshort, Dandy: Yeah, we all play separate games for about an hour a night (after homework and dinner). We all multi-task, and we talk and do other things while we're playing.

Wow, that was fun! I got the

I got the key my first time through and freed the prisoner. However, I failed opening the security door and went back a step to do the computer and elevator ending. Continuing on again, I didn't free the prisoner.

Now the key is gone from all playthroughs. Also, he does not break down any walls from that one time I freed him. :(

@KingofTown: Try reloading the game. That should reset the Biggoron's Sword quest.

Did any one see a spy. There EVERYwhere.

Why does the "Hey, look! Charles is here!" fail still make me laugh so hard?

The best thinking game ever, i love playing it at their official webpage.

899 Views
0 Comments
jayisgames.com— Autumn and winter are those seasons that will force you to spend more time indoors. However, you do not have to spend it bored: exciting PC games are just what you need to add more excitement to your routine....  ...