When the world relies on one hero to save them all from a terrible beast you had better hope he's got more to his arsenal than just jumping and swinging his weapon. Well, that's all this one has got, but in these different colored worlds, some helpful creatures show him some new powers that will help him bring hope and light back to his people. Imperil, by Henrik Sahlin and Erik Swahn, is a platformer where each new area comes with a new weapon in your arsenal. Whether it's building platforms under your feet or altering the world around you, you can guarantee it's going to be the exact skill you need to win against this nameless blight. Move and aim spells with [WASD] or the [arrow] keys, and use [Z],[X],[C] or [K],[J],[H], respectively, for jump, attack, and your special. With really not too much story to focus on your goal is to kill, find the many hidden secrets to buy health upgrades, and enjoy the retro feel in this action packed game. 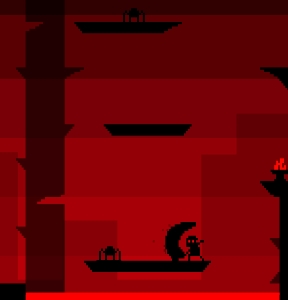 Each new world or level is shown by a different color in the background. Right off the bat you'll get someone who explains a bit about your special ability, but sadly once in the new area the last special you had from the previous world will be gone. Which is a shame, because some of these unique moves could have an entire game based solely around them. Instead, we get a little treat of each, which is good because they never get old. Though some of these moves are attacks, you'll still use your sword to, flip switches, break down weak barriers, and slice through pillars to mark a save point. Keep an eye out for the glowing rooms as that is where the experience-point merchants are who will trade you for a bigger health bar. This game is really simplistic with its bare storyline that has you filling in the blanks. It's so simplistic that... they left out the pause button. The game is on the shorter side, but with a timer racing on in the corner to see how long it takes you to finish, it would be nice at times to be able to take a breather without feeling rushed, but alas there is no way to do so. However, it's an inventive little game you're not going to want to pass by so give yourself some time with no interruptions to see if you can defeat the final boss and be the hero to the endangered people we never actually see.

This is a perfect casual game--interesting without being too deadly challenging. I really liked the health-increasing mechanic, which made it worth looking for the hidden "experience points" without making it too problematic if you miss them.