The show must go on, unless of course there's a big burly dude waiting to break your fingers. Though he learned from his previous mistakes and arrived to host the Game Developer's Conference prepared, Double Fine's Tim Schafer never expected to have to prove he really is, y'know, Tim Schafer, to a giant of a security guard who won't let him onstage. In the adventure game Host Master Deux: Quest for Identity, created by Benedikt Hummel and Marius Fietzek, Tim's got to track down everything he needs to convince the burly gatekeeper he's the one and only. He'll need a Schafer-like beard, more Schafer-ly attire, and some classic Schafer-esque jokes, but rounding all of that up is going to be anything but straightforward. Or sane. 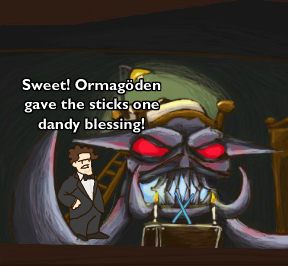 Use the [arrow] keys to move and jump, and tap [spacebar] to interact, with the [1-5] number keys used to select dialogue options. You can only carry one item at a time, and hitting [spacebar] will cause you to try to use it, or you can use the down [arrow] to drop it at your feet to be picked up again whenever you like with the same key.

Though drastically different in style from 2009's misadventure, Quest for Identity is definitely no less funny, albeit in a more surreal way. The art and animation are adorable, with a funky and fitting (though somewhat repetitive) soundtrack by Major Bueno. While all of the puzzles are weird, they also make a strange sort of sense within the game's quirky world concept, so experimenting and paying attention to your surroundings will get you pretty far. It's on the short side even with a few different endings, but despite a little tediousness from trooping back and forth with only one item at a time, it's still a fantastic, gleefully giggly adventure to brighten your day.

you missed an ending

light the fuse on the rocket, but THEN go to the stage...

Thanks! I knew there was ending potential there. I've added it into the walkthrough.

A _little_ tediousness? After two treks across the whole game, I gave up. Mass Effect's elevators were far less annoying!

I didn't find it THAT bad personally, BubbaJoe. :) If you leave every item over in the manor where you need them to be anyway, you at most have a two second trot to pick up what you're looking for. Everything is pretty close by.

@Dora: the t-shirt is the problem. Try a combo, it doesn't work, need to trek all the way back to get another one.

I found another ending:

As �tragic end,� but take a sleeping pill before going on stage. You fall asleep before you get to the podium, thus saving you from being crushed by the rocket. There are probably sleeping-pill enhanced versions of the other endings too.

Please take the game off site until it has been fixed. It's laggy and it takes up 300 MB of memory and hasn't stopped using memory yet, so it obviously has a huge memory leak.

Hi ThemePark. I'm not experiencing any lag or memory issues whatsoever. Have you tried another browser?

Thanks! The walkthrough now has three more endings. (I hope there aren't any more; having to play through the whole game again for each one is starting to grate on my nerves.)

I try jumping up and down beside the rocket with the fuse lit, but I still can't manage to get inside it before it takes off.

Try pressing SPACE at the peak of your jump.

There needs to be a "save" feature so that we can experience all of the endings without having to completely re-do the game each time. Or at least an acknowledgement at the end that we finished, and would we like to try for a different ending?

I gave up on this one as well. After playing it two times with different bugs - (first time I accidently left the bird at the washing machine and couldn't pick it up again, second time I tried jumping next to the glue and pressed space while in the air - again with the bird - and when he landed I couldn't move at all) - I gave up. There really needs to be a save button (and less bugs!)

After putting the shirt on I can't interact with other objects. He'll blab about them, but won't pick them up :( it's happened even after refreshing the page.

Using the spacebar doesn't allow you to pick up the objects, just describe them. You need to use the down arrow key. ;)