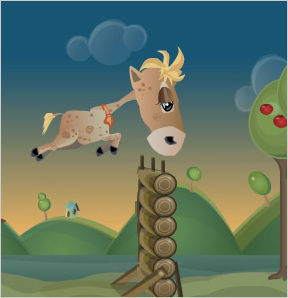 Another group of talented Flash game developers that I have been keeping an eye on are Florin and crew over at gameSheep in Romania. They used to do primarily client work, but have since gone out on their own and made a name for themselves by quickly establishing GameSheep as a popular destination for free online games. One of the reasons the site is so popular is due to the original content they continue to release for their site.

Horse Racing is their latest effort, a Flash racing game that puts the player in control of one of three (3) different horses on a race to the finish line.

The mouse is used for control in this easy-to-play game. Just position the mouse cursor within the game window and your horse will match its position. Click the mouse to jump, double-click for higher jumps. The farther forward it runs, the faster it goes, but also makes it more difficult to see upcoming jumps quick enough to clear them. Running faster also depletes energy, which will soon run out when running fast, so watch the energy meter and fall back when it gets low, or replenish energy.

You can replenish energy by jumping for apples (they look more like cherries) visible in the trees that pass by, or jump for golden apples that will provide double the energy. Additional power-ups are available that can give you foresight into how far away the next jump is, Pegasus-style wings that allow your horse to fly for several flaps of the wings, or a long-jump capability that sends your horse soaring forward the next time it jumps.

Two modes of play provide for a Quick Race against a single horse at the difficulty of your choosing; or tournament play that puts you through a series of (rather long) races against increasingly more difficult horses. Start with a quick race and choose a medium difficulty.

Analysis: I have to say that a horse racing game has been in the back of my mind as something that I'd like to create myself, so I was pleased to see this one come along. Although a different design than one I'm thinking of, I feel that Florin and crew have put together a fun little game, even if it has a few flaws.

First off, the graphics are beautiful as we've come to expect from the gameSheep artists. Really nice colors and gradients, and charmingly cute horses with dopey faces. I especially liked the choice of background music and how the running-hoof sound effects are synchronized with the music. Very nice.

In terms of gameplay, it just doesn't offer the excitement that racing games should have. That isn't to say the game isn't any fun, just don't expect many thrilling photo-finishes when playing it. Think of it more as a leisurely single-player jumper than a horse race and you'll probably get more enjoyment from it.

I believe there are two reasons for this: (1) Each race is so long that there leaves very little possibility of a close race other than at higher difficulty levels; and (2) the opponent horses don't appear to jump for apples or power-ups.

Finding the right balance with a racing game such as this is likely as much of a challenge as creating the entire game engine itself. The inclusion of the Quick Race mode is therefore a very wise decision, and is the mode that most players should start with.

All things considered, not a bad game by any means. It's a cute game that offers fun for gamers of all ages, and one that provides a little racing action when the difficulty is set just right.

At first, I expected this to be pretty boring, but I was surprised! A lot of fun to pick up for a quick 5 minutes every now and then, or for a nice half hour if you have the time! Good find

I, too, was pleasantly surprised Imok. I'm glad you agree. =)

i was wake up go to my computer to internet and to jayisgames.com i was happy i see 3 new games and i like it i love Horse Racing the world needs funny games and i agree to jay and Imok!

You're right Atomic1fire, not all of their games are original productions. The Horse Racing game is, however, as are many of the others.

I didn't mean to imply that all the content at gameSheep is their own.

A fun little game, in short bursts. I just love the music though, it suits the atmosphere really well.

Just wanted to second (third?) that the music for this game is really lovely. Wish more games would follow suit.

Fun game too, though I like that flying man game they put out a while back more.

Haha, I really liked that. Especially since I can't ride horses in real life, haha!

LOL that game is AWESOME! I wish I had a blue horse like that. The music and the horses seemed kinda sad, though.

Link is dead The game is still up though.

It looks like gameSheep moved things around a bit.

i think this games is very good

Jay - You'll have to Replay this one for the Kentucky Derby :-)

Found this game only now.

I agree with most of you - it's a nice and enjoyable game. Jay, I even had some near-photo-finish races :D

The game's fairly easy to master. I won almost all the races once I realized that mid-speed is enough to win, I don't have to rush too much. Also, I found out that jumping for apples and wings and stuff isn't necessary - you can win co9mfortably without them. The only really useful powerup is the clairvoyance thing.

All in all, thumbs up for this one!

PS: Jay, the name of the game is "Horsey racing", not "Horse racing".

1,831 Views
0 Comments
jayisgames.com— Some video games are incredible, but they don't get the rating or attention they deserve. Here's a list of the top underrated video games worth your attention.  ...