Hey, you! Yes, you! You, of course, being Rick. You're not a thief. No, not you! You're just... down on your luck a little. Supremely unlucky, in fact, since the sheriff happened to show up just as you and your good buddy Muddy Charlie were liberating some silver. Unfortunately, he's not willing to let you off with just a slap on the wrist, 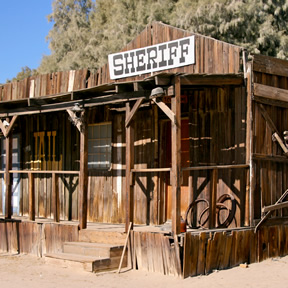 and in this bit of interactive fiction you'll have to use every trick in your cowboy book to escape the Hoosegow, the award-winning CGDC7 entry by Ben Collins-Sussman and Jack Welch.

Make your breakout by thinking outside the box and typing your actions into the game. "Look at", "use", "ask ___ for", "search", and even "spit" are just some of the things you'll need to do to progress. Pay close attention to your environment; characters will occasionally prompt you with a hint as to what you should be doing, but you'll have an easier time of it if you remember to examine everything. Don't be afraid to experiment, but if you need a nudge, type "Help" or "Hints" for instructions and clues, respectively. 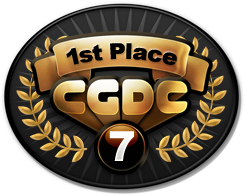 Analysis: Hoosegow is exceptionally well done, with humour sprinkled throughout its robust narrative. So robust, in fact, that you can spend more time reading the fiction itself than you do interacting with it. Small, seemingly inconsequential actions can trigger a glut of three, sometimes four meaty paragraphs. Sure it's well written, in a classic aw, shucks, hoss sort of Western vibe, but it does occasionally make you feel as though you're doing little more than setting off cutscenes. Cutscenes you read.

You'll need to pay attention during those scenes too, since you'll miss out on important clues if you just skim the text. It would help if the items you could interact with were more obvious; less challenging, maybe, but it's easy for the less observant to spend a while fruitlessly spinning your wheels just because you didn't realise the item mentioned briefly at the end of another description was something you could use. Maybe this wouldn't be an issue if some of the solutions were a little less oddball. Thankfully, the hint system here is actually well implemented; hints are provided in tiers as you request them, getting more and more explicit as you go. It's a nice touch, and will be appreciated by players that just want a nudge so they can figure something out themselves, rather than being explicitly told what to do. Hey, my brain works sometimes!

Okay, so the game is good at providing direction when you ask for it. But what it is absolutely fantastic at is staying in character. Hoosegow exudes a sort of effortless, good-ol-boy charm that features in even the help menu. Visuals? Your brain is your graphics card here, and thanks to the authentic twang that permeates the dialogue, you'll have no trouble mentally envisioning the picturesque loveliness that is your dank little cell. Mmm, smell that stale perspiration! It's like you're really there! Ooh la la!

Tag team champions Ben Collins-Sussman and Jack Welch have created a wonderful thing in Hoosegow. It's fun, funny, and guaranteed to bring out the cowpoke in you. (A dusty, bumbling, thieving cowpoke, but a cowpoke nonetheless.) A workout for your imagination as well as your problem-solving skills, Hoosegow is a challenging escape for those of you who have always wanted to ride off into the sunset. Sort of.

It's too bad the game can only recognize only a few verbs...Folks would definitely go for an all-out dialog(where you can type almost anything and the computer instantaneously recognizes it). Oh well...Perhaps in the future.

Definitely an excellent piece of Interactive Fiction. Well written, but it had some problems. The commands for doing certain things were sometimes really difficult to figure out, forcing me to go to the hints at least once for every puzzle. And then there's the barrel that the game assumes you know about.

But like I said, I enjoyed the style immensely. It's nice to play a new, fresh piece of IF every once in a while. I'll go try some of the other top entries tomorrow.

I really enjoyed playing this. Not too long, interesting characters and puzzles that are fun to solve. It would actually make a great point-and-click game!

The atmosphere was particularly good - I felt like I was in a Western (except for the slightly odd invention ;)

I think the barrel only appears

After you've found a way to raise your eye-level

It's then mentioned in the new description.

This seems reasonable to me, especially since you need to do that for another puzzle, so it's not requiring that you be psychic.

richmcd/BrahManty: I believe to see the barrel you have to type

on top of the stool. (Is there another way to raise your eye level?

This is actually a little finicky because

doesn't give you the same description. The difference between the two is logical, but if you don't know both commands are available you might get stuck.

RJ -- I think everyone might like that! But it would be impossible to program. Part of the trick is implementing as many synonyms as you can, and doing as much as you can with the standard several verbs that most IF players expect to use.

I can't leave the cell now that I've done the required things. I need to "go over to the office" but I can't do that!

matt w - I agree with the whole barrel issue, I tried

and none of them worked. But that's one small qualm compared to the overall quality of the game!

n - Not sure where you are exactly. Did you

If so, did you try

a berry, a tube, a feather, some other stuff... some chewing tobacco! I read the hints and I'm trying really hard to spit things at the bell but nothing's working. The deputy's gone because of my smelly feet and poor musicianship. And I keep trying to give the berry to the dog but I can't do that either.

I can't do nuffink! Hmph. Can anyone help me please? ta xx

oh, nevermind! I was being too complicated.

Thanks, everyone for playing the game, and particularly to those of you who have left comments. Hoosegow was essentially written in five weeks, so it is certainly not the most polished example of IF available. Even with excellent feedback from our fine beta-testers, we had to focus on the big items and let some of the minor implementation issues slide.

Like many of the authors in the comp, Ben and I are planning a post-comp release, and would appreciate any suggestions or feedback; transcripts of play sessions would also be great. There are some instructions in the help menu for giving feedback via email or directly via the site's issue tracker.

p.s., regarding the barrel,

In testing, the vulture puzzle was the most difficult, so we tried our best to clue it, but yes, the barrel is lower than the window, so it can only be seen when the player is either on the stool, or has been boosted up by Muddy. An alternative is to put the meat on the window sill. We considered the barrel necessary because the vulture has to land on something. He can't hover outside the window like a harrier jet waiting for someone to pluck him :-)

I think I found a bug. I even followed the available walkthrough to make sure I wasn't doing anything wrong.

Since it appears near the end of the game, I'm using spoiler tags.

When you have all the evidence against the Sheriff, you're supposed to wake the Deputy in order to show him the evidence. However, and maybe I'm doing something wrong, waking him up only makes him go back to sleep, and then General doesn't arrive in order for you to show the evidence to him. I can't show the evidence to anybody because the game thinks the general is there and gives me the "senior lawman" message.

I'm loving this game, but *spoiler alert*! gol-dern it, I can't seem to spit the tobacco at the bell, no matter how I phrase it. I'm sure I'm missing something obvious, but the only place I can spit it is out the window. I am off base with this? How else can I ring the bell?

open can with spur

give beans to muddy

give spoon to muddy

give feather to muddy

give berry to muddy

give warrant to muddy

I really loved this game. Simple rooms, logical puzzles, and ridiculously fun characterization. My only problem was that I kept typing Moody (like the HP character) instead of Muddy and couldn't catch myself doing it until I got the same error message a few times in a row. 8)

Congratulations, JIG and Hoosegow, for getting an article in the Toronto Star today! It was a piece on IF but this competition was touched upon quite a bit.

"You whack the disheveled old man, making a sound similar to a frozen cow patty shattering in a sea of lava"

that phrase was enough to make the game awesome for me