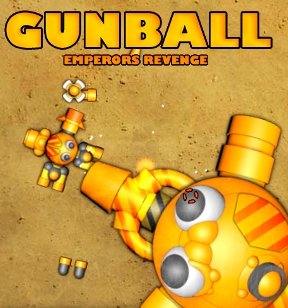 Halfbit's got that boom boom pow in their arena shooter Gunball 2: Emperor's Revenge, which focuses on a relateable protagonist with realistic goals. Namely, a little goggle-eyed sentient ball that spits bullets out to topple the leaders of his kingdom and become the next ruler of all the other ambitious goggle-eyed sentient balls. I think we've all been there, amirite? Use the [WASD] or [arrow] keys to zip around the field, aiming and shooting with the mouse, and unleashing whatever special ability you have with the [spacebar]. Take down your foes to earn experience points so you can gain levels and new skills, but also money to spend in the extensive shop to outfit your little hero into a rolling orb of death. Truly, a poster child for freedom, independence, and irresponsible body modification.

While there are a lot of arena shooters, they tend to be a little heavy on the whole "blood, guts and genocide" thing, which makes Gunball all the more welcome for its comparatively family-friendly gameplay. You're still blowing enemies up, but the twee presentation and lack of traumatising body parts means this one is about as horrifying as Zuma. More importantly, however, for those of us without ankle-biters, the game is just plain, frantic fun. While some levels do tend to drag and become engorged with so many fast-moving objects it can feel like skill is only somewhat important for victory, the sheer amount of levels, upgrades, enemies, and power-ups makes this game a definite win in the wheeeeeee category. You wouldn't ever call it particularly complex or inventive, but Gunball 2: Emperor's Revenge is the perfect fast-paced treat for when you want to blow something up. Remember, googly eyes make everything better.

This game is buggy...

I wasn't able to play, as any time I clicked anywhere in the game, it opened a new tab to the PlayHub website.

[I cannot reproduce this issue. What OS, browser and Flash Player versions are you using? -Jay]

This game is aimed at people much better at this kind of game than I am.

It looks like fun, but very early on I've got two levels available which are both too hard for me (no skills, very little upgraded). Since - unusually - in this game you don't get to keep any of your money or experience in a level you can't beat, I'm clearly not going to get any further.

I've rage quit on games before, but this is the first time I've had a sense that a game is rage quitting on me. I guess I'm just not good enough.

This game is pretty good, but it suffers from a lack of balance. For instance, the sword boss, which can easily be the first one you fight, drops a sword which is arguable the best weapon in the game, whilst others can be hard to reach, then drop fairly mediocre stuff. The time slow power is really easy to get, and overwhelmingly powerful. It practically recharges itself before the effect wears off, allowing you to exist perpetually in a bullet-time like state. The bosses don't provide satisfying battles, they either bring enough firepower to bear to smack you down very quickly, or you can often charge into them with the giant sword I mentioned earlier and obliterate them very quickly. Most of the damage boosting stuff is pretty much pointless, as it does not take long for the base weapons to be obliterating things by themselves, and you can tear through the bosses without it. Ditto with the crit-based gear. The tesla field upgrade is buried deep within the upgrade tree, making it hard to get, but once you get it, the effect is very underwhelming. It is also a scaled upgrade, but it comes in at such a high level that you don't really get enough points to even to try to upgrade it. The battery upgrade is also pointless, since you can maintain perpetual slowed time without it.

despite the balance issues, it is pretty fun, and I played through it twice with different strategies.

@motty
You can replay old levels to get more stuff if you need to. There is a kinda difficulty hump near the beginning. Also, you can sell components for full price, so feel free to try out different configurations to see what works best for you.

fun game, enjoyed it, but wish:

(1) leveling up meant something. I mean, there was next to no purpose putting stat bonuses in anything, when it only takes 15 levels to win.

(2) that time skill where all opponents stop for a second, is ridiculously overpowered. Made game pointless.

1,659 Views
0 Comments
chrpa— Jayisgames needs your help to continue providing quality content. Click for details Welcome to Mobile Monday! Cute adventure by YoGreenSoft's (yogreen) is not their first - the link to their previous game you find under the game's description. Sanukin's...  ...

4,928 Views
1 Comment
chrpa— Jayisgames needs your help to continue providing quality content. Click for details It's always a perfect time for a hot spring bath, but at the end of winter it's one of the best things you can wish for. Unfortunately, unless...  ...