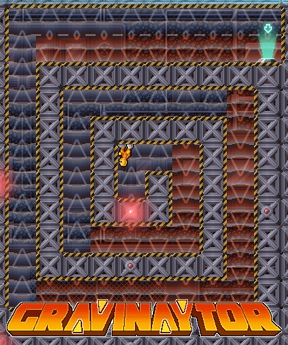 Undoubtedly, once scientists manage to harness and control the direction of gravity they will start to do really strange and interesting stuff with it. Building a crazy gauntlet of levels and decorating the walls with spikes, though, does not seem like some of these. So I am calling the game out: the premise of it representing a lab experimenting with gravity is a lie. Alnoor Games' Gravinaytor, a sort of puzzle-platform gravity hybrid, was made to torture you, the dear gravity game addict. And trust me, you will love to hate it.

The principle mechanics of the game is same to everything else in the genre. You are able to switch the direction of your falls with different switches, in this case represented as zones you step into. By using the appropriate direction at the right time, you navigate through a series of platforms towards a portal at the end of the level. Every successive level pushes this further, introducing moving platforms, buttons for doors and sharp spikes that are lethal on contact.

There have been many twists on the concept, which is perhaps why Gravinaytor steers away from being too creative. Instead it holds a certain vanilla feel that actually works in its advantage. Instead of trying to rewire your brain with every gravitational switch, the challenge instead is to find the correct way through the level. Even the controls are remarkably spartan; the direction on your keyboard always corresponds to the screen and the appropriate direction button will also initiate a jump if gravity is pointing the other way. (But I would like to mention one big flaw: no level select.)

Instead your skills will be invested on the timing it will require to get through a level. And the patience. Oh, the patience. Resetting a level is mercifully instant, but reclining on a moving platform, waiting for that right moment to jump into a gravity zone so you swoop around a cluster of spikes and back up to land on the platform again, is not. Did you catch of all that? That is level 18, the point where the game eventually shows its colours. Compared to the extremely simple beginning stages, the last seven to eight levels will leave you at the end of your wits. Timing becomes a measure so pedantic that some challenges will appear impossible.

They aren't, but don't expect Gravinaytor to be easily beaten. That, along with the pretty spot-on controls and inventive levels, is what makes it work. There have been a manifold of better, smarter and screwier games at the gravity party, but few would meet Gravinaytor's penchant for sadism. If that scares you, don't give this a try.

Thank you James for pointing out level 18. That's as far as I got. My computer lags on that level, and I can't properly time the jumping, because I can't follow my fall.

The game is still the best gravity game I've played in a long time.

I love the game for its unique switching around feature, but it lost me on level 18. I know I am going to try again, but will my laptop be patient enough with me?

Level 35. is there a bug or am I just missing something?

The guy fall and fall and fall, and finally land on spikes. On restart I enter the level midfall, and not in the "cave" where it started first time...

I feel a little cheated here, there was virtually no gravy at all in this game, despite the name.

Since the dawn of Portal, there'll never be honest computers or scientists in these test subject themed games

Maybe other people feel other ways, so I recommend, when making this type of game, to allow the player to choose their control style.

I think it would have hurt my brain less if the controls had rotated with gravity. Also, I unfortunately do not have the patience to ride along for what seems forever on a moving platform; especially when you have to do it over and over on so many levels.

The game is good, the kid voice didn't feel like it fit but was reminded of Chibi Knight (coincidence?).
Though I feel like this year there has been a great load of test labs with obvious suspicious computers (if you like Portal be original and don't make it any harder for them).

I didn't get far on this game. I had so much lag on some levels that I couldn't time my jumps properly and quit out of frustration. I liked arrows instead of the switches though, I don't play a huge amount of gravity games, but I am glad I played the few levels I did on this one.

for level 35 press the right and down buttons as soon as you fall.
keep on holding them till you exit...

Can you please help me with level 23? I would be really thankful.