Grab Them By The Eyes

In Terry Cavanagh's Grab Them By The Eyes, you were just minding your own business, slinging burgers out of your modest food stand, when a pair of upstarts with a much flashier sign set up shop literally a few feet away and began stealing all your business. A little shocking considering they're literally called Filthy Burgers, but it turns out there's a secret to drawing in the glazed masses, and that secret is making the best flashy sign you possibly can by combining message, colour, and other punch cards at the sign shop. See, you use your cash to buy various punch cards at the start of each day, and each card has a value that determines how many customers will be brought in. You and your competitors will take turns buying cards until they're all gone, and then you'll build your sign by selecting which cards to use to try to maximize your pull, which is harder than you might think... especially since cards become less effective the more they're used, though they can only ever decrease to a minimum value of one. It makes a deceptively simple looking game into something much more strategic, and you'll need every customer you can get since the food stand with the least by the end of the week needs to leave! 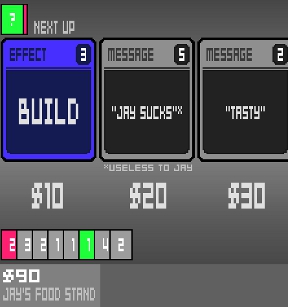 Grab Them By The Eyes' goofy premise seems like the sort of thing that should be simple and easy to win at, but the way cards depreciate in value means slapping the most expensive upgrades all over your sign isn't always the best way to win. The prices for the available cards actually decrease with each turn, so do you snap up a costly card now, or wait for it to drop a bit, even though your opponents might nab it? Do you buy a card that you know is useless to you, just to keep it out of the hands of your rivals, or do you hold onto your cash for the upcoming days? Whatever money you have left after buying rolls over, after all, and you don't want to risk your foes being able to buy all the best upgrades before you do in the coming days. It's also a weirdly tense game... you always know how many customers you're going to get, but you have no idea what configuration Filthy Burger has settled on, so watching their numbers mount each day will set you on edge. Grab Them By The Eyes is a fantastic example of combining the silly and the smart into something that's, well, more than meets the eye... which is basically what Terry Cavanagh is known for. So straighten your apron and get your LEDs ready... you're not about to let those snide hipsters drive you out, are you?

Play Grab Them By The Eyes

The game's annoyingly reliant on luck. My first game, the competition got first pick not once but twice when an extra frame was available for cheap. Needless to say, I didn't win that game.

I also don't understand how the AI players manage to get more money than the human player, if he's winning the competition. I suppose that money is given according to the number of customers, but that doesn't make a lot of sense.

The game elements are neatly packed to form a good experience though.

Funnily enough, I just managed a win when I never got an extra frame and the computer got three of them. Only won by five points, but extra frames aren't an auto-win if you don't have the cards to load them up.

Each team gets $50 per day to spend on punch cards. This amount is not dependent on customer count. Leftover money carries over to the next day.

Money carries over? Now that I know that, I really wish there was a "pass" option when buying. (Naturally, it would turn into a "done" option when your competitors ran out of money.) Sometimes the only thing I can afford is useless to me. When I thought I was going to lose the money anyway, I didn't mind throwing it away like that.

4 out of the 5 times I've won, I didn't get a single extra frame. The AI really overvalues them.

I feel like there are too many opportunities for the opponents to get a runaway success but that same trend does not happen to me!

I haven't won yet, but I did manage a tie. It was *awesome*.

...oh, the endgame for a tie is roughly the same as the one for winning (only with more "uh, what do we do now?" text). That's a shame--I was hoping I'd gotten to see an Easter egg. Ah well.

I just won by a margin of 1 deliberately losing on weekdays not showing my good cards so they do not lose novelty. On weekend much more customers come so the high quality cards made a much bigger difference, I thus won despite the AI getting lucky and fetching cheap extra frames when going first. I even did not go on stinking business using the devaluating sign on them. (I wish there was an extra award for that)

Anyway I approve this game and it would be a brilliant advertisment strategy for a company selling LED signs... I do not see any tough.

I managed to win. Partly it was luck but partly

I bought a lot of cards at the $10 level. I built up a margin of 11 at the beginning of the game so when they started to get more customers than me it wasn't enough for them to beat me overall.

Fun game. Thanks for featuring!

Anyone else get stuck on the results page for a day and not be able to advance? I made it to Friday, and now clicking on the results doesn't do anything. Could it have something to do with having written my own message that day?

I don't think so...I always wrote my own message and that didn't happen. It's probably just an unfortunate glitch. :(