Platformers follow a pretty basic structure, right? Move to the right, collect the coins, don't fall into the spikes, enter the door, yadda yadda. The formula seems pretty played out... that is, until the player finds a snafu in the developer's design. There's nothing better than flouting the expected solution, finding your own way to win. Glitching—it's the cool new thing to do. But what happens when you're forced to rely on those bugs? When glitches become the only way to win? Well, then it becomes Glitch Lab, an experiment in "broken" gaming which absolutely revels in subverting expectations. Made by developer Nazywam in mere weeks for the recently finished Glitch Jam, Glitch Lab plays similarly to unique platformers like the Karoshi games, adding in a dash of original humour and a lot of style to create a unique, short and sweet package. Using the [arrow] keys to move and the [spacebar] to jump, your quest is to find and exploit the glitches that will enable you to reach the end of each level. Some glitches are subtle, others are colourful and in your face—and all of them are a ton of fun to find. 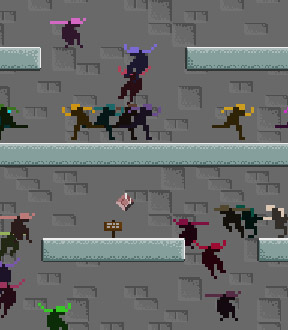 With only a handful of levels, Glitch Lab is not a long game, but it is one that grabs and holds your attention for as long as it lasts. From the outset, you'll realize that the developer is messing with you when a sign reveals that the alluring pink floaty gems are... completely useless. This doesn't stop us from collecting them anyway, of course. Signposts hold a lot of the hints you'll need to complete each stage. There are a few that aren't useful whatsoever, and at least one that simply reads "How did you even get here," but that's part of the fun! The relaxing synth music and dull greys of the colour palate make the game seem rather blasé at first, but they exist for a reason; anything out of the ordinary is bright, colourful, and easy to spot. In this way, some of the levels are actually more spectacle than gameplay. Watching your character walking around upside down is fun, but doesn't amount to very difficult platforming. The difficulty level is perhaps the game's only major flaw. With players going in expecting to have to search for anomalies and exploit glitches, it becomes quite easy to find most of them. By the end though, you likely won't care that the game was simple. The wit, charm, and humour that pervades Glitch Lab makes it a fun experience for anyone. There's not much of an ending, but if you don't mind a touch of naughty language, you'll get a laugh out of it anyway. Good thing we don't have any glitches around here. Oh, and don't forget tooqwef6w8h.##458asd& ** <('.'<)!! aswdppkod p 98fas00000110100000100010011000100010000100101100000010000000101000100000010110011000000010000100000100010000100010100010000100101001000010000001010010100 I AM ERROR.

The non-ending is my biggest beef. The game doesn't just not end, it also doesn't send you back to a menu or indicate "game over". (Unless I'm missing something I could do to make this QR code go away.)

In level 15, just play around a little and see what happens.

Solution if you want it:

Let your guy fall faster and faster until the game breaks.

All things considered, the game wasn't nearly as innovative as it could have been, but I did enjoy the QR code at the end.

I assume the QR code is the end as well. Would be nice for a "The End" message or something.

The QR code at the end says

You Sir, are fucking awesome.

Did anyone try scanning the code?

Oh darn it. I believe I have been Ninja'd. Please disregard my earlier comment.

you COULD HAVE SAID

You Sir, are f-boming awesome.

Just how am I supposed to

use the fact that I'm not going to die young on level 6?

Rygar: I just watched a walkthrough. For level 6:

Die, regenerate, then immediately run through the lasers while you're still flashing.

Die in the same place again?
I think.

This was a fun game, but when I clicked on the link for glitch jam and tried to play a game avast indicated that it had blocked a virus. Could have been a false positive but thought I would report anyway.
Thanks!

Not too much of a fan of old pixel retro games but I love how *almost* each level made you start a new type of logic. I did like the cats as well :)

Short, but hella fun. Even if I was not entirely certain how I beat some of the levels. If they could keep being creative, this could be a series along the lines of "Achievement Unlocked."

Level 15 is the end. What you do is you (optional: collect the coins) fall off the platform you spawned on, and then your character will fall faster and faster until there's an "error".... and that's the end. (By the way, please do marvel at the cat)


I am flipping awesome.