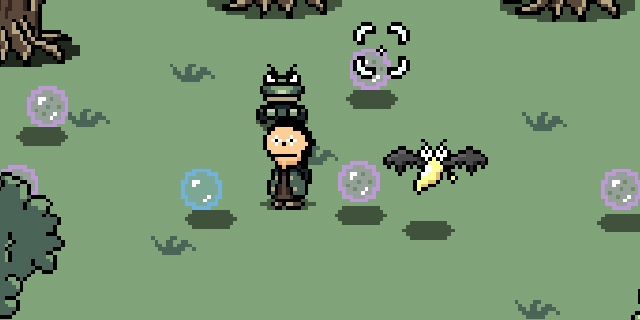 You thought it would be a simple errand. Just run along and get some milk for the King of the Village's Friday pancakes, right? The trouble for protagonist Zbylut (pronunciation unknown) begins when guards block the entrance to the town. Apparently, the town is to remain closed until a scary monster is disposed of. A wizard by the name of Bdzigost (pronunciation also unknown) is meant to be dealing with it, but...let's just say he is running into a problem with frogs. After enlisting you as his apprentice and resolving that problem, he ensnares you in an interesting catch-22: you now have the experience to dispatch the monster in the forest yourself!

Rzuf's Frog Fable skillfully and seamlessly combines the elements of a role-playing game tucked away in a menu, cute retro graphics and catch music, and classic bullet hell. The difficulty level ramps up steadily throughout the game, but periodic opportunities to save progress help to mitigate frustration. Controls are simple: use arrow keys or WASD to move around, space bar to interact with NPCs, and left mouse button to fire off your bubble magic. Plenty more plot twists await you, but hurry - the King grows cranky!

It was fun, yet oddly seems incomplete. Like there's so much that needs to be expanded on and explained further. The gameplay is pretty solid other than some minor required grinding and it's not a lot.

thought it was kinda fun, but it starts out waaaaaaaaaaay to slowly. many of the upgrades felt superfluous when you can finally earn them... well, aside from the final battle that is.

never did figure out the Emotional Abuse secret medal though. that one still eludes me.