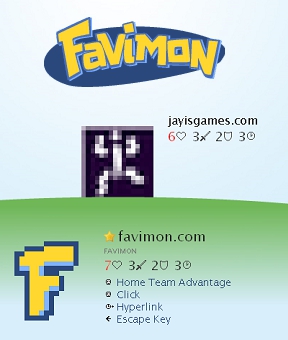 Favimon, the new HTML/Javascript webtoy from Matthew Hollet is a combination of the two topics the internet was founded on: Pokémon and "Who Would Win In A Fight?". You see, Favicons (the little graphical icons in your browser's address bar) have come to life, ready to attack all other pretenders to the internet throne RPG-style. And yes, you know it's your destiny to try and cache 'em all!

To locate a Favimon, you use the keyboard to type a web address in the box at the top of the page. If the site is in the surprisingly robust database, it appears for a mouse-controlled turn-based battle. Each Favimon has stats for health, attack, defense and speed, as well as four appropriate actions used to dominate your foe. Starting you quest with the original Favimon site icon, defeating other websites adds them to your team and then become available to use in future battles. There's no real goal other than collection, but man, there are thousands to collect.

Favimon relies almost entirely on the novelty of its central gimmick. That's okay though since the gimmick is quite novel indeed. Racking up all those Favimons in your Favidex is just incredibly compelling. Certainly some icons look better in large form than others (and, in a not-updated browser, they'll look more blurry than pixelated), and the attacks do get more generic the further you get from the top domain names. However, this is easy to forgive the second you set up a Google vs. Facebook grudge-match, or use Paypal to zap Wikipedia with a "Transaction Fee" attack. Favimon isn't all that deep, but as a charming time waster it's super effective!

Ok, definitely amusing as I captured fark.com and then have it battle reddit.com. Followed by an assault on jayisgames.

For the amusement alone I give it a good rating, more fun than many more polished games I've played.

Jayisgames is magical. Or at least the one I had was. Boost defense then spam Group Hug to heal your party. After reading the FAQ it seem that not all of the Favimons will have the same skills or stats.

I find it ironic that http://bulbapedia.bulbagarden.net (It a famous Pokemon wikia) ended up with a sad looking Favimon when it came to the stats.

Using common sites is good but the search bar will give you a link if you type 3 or so letters. It not really a game I would play for more then a hour at any given time but it is good for a laugh when you see ChuckNorrisFacts kill one of your Favimon. =P

A good find. I may check back on it once in a while.

lol awesome game.I just fought one site with 12 hp and all his attacks doing 2 dmg lol and i gained special attack only for this one : outbreak. i dont know if its random but here :

4chan.org lol rly it was hard for me

oh i just got a shiny one :D i better keep it for the multiplayer

Oh my gosh, cutest thing ever. I captured mozilla.com and its cute little Firefox icon. That made me happy. Like having a little pet.

I took Zombocom too, only to find out it had no attacks at all, just a ? action with no description labeled "Welcome to Zombocom." No wonder it could only be confused while I fought it.

I never played any of the Pokemon games, but I still love this. It's cute.

Interesting idea but I'm not keen to play it just for the reward of collecting favicons.

I was impressed that my personal website appeared as a favicon :)

Glad to know I'm not the only one who found Zombocom :P

I'm pretty sure that both the internet and Pokemon were created during the cold war as a secret military project.

So that's why I'm finding subtle nuclear references in the way the Web is structured. I thought I was just seeing things.

It was odd that sites like consumerist.com and youtube.com had no favimon, but maybe that was just me. I mean, my second Favicom was a shiny BBC News.

This is hilarious. Is there any way to heal your Favimons when they're not in battle (some of mine have Cookie, but it's kind of pointless since you have to use a turn to do it and it only heals one point)?

Agree with tigrita about the healing. Not much incentive to keep playing except to see new site's Favimon(s?)

xkcd's actions are fantastic, if you're a follower of the site. Also, Reuters.com put Google to sleep for 5 rounds. Ha!

Also, similar to the healing comment, when you change a Favimon's stats (like drop their attack or remove an action), it's permanent. That seems silly. Why would I want to capture a Favimon I weakened so it couldn't beat me?

(I know it's just a silly novelty game, but still.)

I has a shiny mozilla :D

This game is good, who else has got Homestar Runner? It's absolutly awesome (references to the animations and games included).

Reader is weak against clever writing.
Review was super effective!!

i cant summon a favimon!

zombo.com
Good site to fight so you can heal.

Fun game, though the novelty wears off after a while... but yeah, it's got problems, as mentioned above.

A "problem" nobody seems to have mentioned - you can't fight a site if you already have it (so when you catch zombocom, you have to kill it off if you want to spend time healing and such without risk).

The first thing I did was play against my own website's favicon: and beat Favimon.com! Pretty funny to watch my own site beat the game on the first go

WOW they have Threadless.com on there. These guys are sharp...

THIS GAME IS AWESOME.

Also, it's weird that they had my old job in their database. They're not a famous company or anything and barely rank within the top 100,000 websites according to Alexa.com (which is also in this game lol).

LSN57 and others, you should read the games FAQ. *ANY* site that has an icon is recognized by the game, but with meh stats. the ones with top stats are asigned by hand ind a secret database.

A small bug I ran into,

When an enemy uses poison on your favicon, but gets defeated before your icon dies from the effect of poison; you can return your favicon to the bench where it will have its HP reduced to 0, and if you activate it again you'll have a empty screen. Trying to pick another favicon gives the error: "There is already an active favimon! Return it first."

I have a Wizards.com that has "buy armor", "house rule", and "100-sided Die", making it an invincible tank that can beat anything.

This is a great distraction while I rage at the Elite Four.

minecraft.com is pretty nice, with a class and attacks all to itself.

Wow! I got a shiny Nintendo.com! Glimmer as an attack is insane!! abd when you add nintendo's 13 hitpoints and corp. classes' poach life drain, you get an unstoppable killing machine! Shiny Nintendo rules!

Facebook has the most health i have seen so far... but google has been the hardest one to beat. Google had a speed up, a defense up, and an attack up, as well as a lvl 2 attack, plus it had 12 health. I managed to beat it by spamming heal! Then i had an overwhelmingly OP favi :P

@fuzzyface Yeah I read that afterwards :)

Gotta catch 'em all! Erm... How big is the internet again?

To everybody: Please post some of your favorite cool looking favicons.
Mine so far are purplehell.com (it's animated!) and thegreatinternetduckhunt.com

You guys realize that recommending sites is useless since the moves change every time you encounter it(Other than zombo.com), right?

Not exactly, from what I've seen, while the stats of the sites scale with how many Favimon you've fought or some sort of measure of progress, the sites themselves have specific classes with specific sets of moves. While the same site may get different moves and stats each time, the stats probably aren't going to vary too much from the last site you've gotten (assuming they're both about equally popular, I'm not sure if that plays out at all) and the moves might differ, but it still picks from the same "move pool" each time. Apperently, there are "286 different classes and 1470 different actions" and increasing. Also, if you get lucky, you might find a site with a lucky or a shiny class. Remember shiny pokemon (or if you're really geeky like me, the Red Gyrados)? These kind of work the same.

Long story short, from what I've seen, a Favimon stats depend more on how long you've been playing, and their move depends on their classes, which in turn depend on what the specific website offers.

try kongregate.com
this one had 5 skills

Acually, tvtropes had 15 health for me. o_o
Quite a bit. Maybe the most in the game?
pokemon.com also has a move called potion: level 2 friend healer. INSANELY useful.

The health of your opponents goes up as you progress, doesn't it? That seems to be the case for me.

Not positive how this happened, but one of my favimon became invincible with 0 hp. I think it got poisoned and I took it out, then it reached 0 hp when sitting out. Now nothing can hit it.

@Echoloco: You're not that geeky if you misspell Gyarados. Also, it seems like there are shiny and lucky favimon which both always have 5 attacks. I have shiny favimon.com and armorgames.com and a lucky 4chan.org.

I like the radiohead.com favicon. It's music attacks are pretty good too.

I've finished laying out the groundwork for the Favimon Wiki! (The address is http://favimon.wikia.com/wiki/Favimon_Wiki ) It's only got six pages and probably a ton of errors (if my inability to spell Gyarados is any indication of my fact-finding ability) but it's a start! Check it out!

My google translate happened to have Don't be evil and moves to bolster all attributes. It made this game easy, as I had a fully-powered favicon early on.

My starter Favimon was SHINY! :D

Ooh, my Hulu has a Glee attack.

I got a lucky, shiny Streamate.com. Yes!

How can you tell if a Favimon is shiny or lucky?

@tigrita
Try looking for a website with a social network theme to get the "good friend move" it heals other favimon.

*Anything with Wikipedia as a class
*Roblox
*jay is games!
*Kongergate

Wanna know why Zombocom has nothing?

Look at the site. It litteratly does nothing.

ubuntu.com - if you can get this one with "ubuntu", it can heal teammates 3 hp at a time!