CA Studios' Fading Light is a puzzle platformer that is both clever and atmospheric, if more than a little on the short side. Using the [arrow] keys to move and jump, it's up to you to figure out how to guide our lonely protagonist through each level, with only the illumination of their lantern to see you through. The in-game narration will often give you clues as to how to proceed, since the way forward isn't always as clear as the landscape might try to make you think. I misinterpreted a comment at the start of the game as snarky rather than sincere and had expected Fading Light to be a parody, but nothing could be further from the truth, which isn't a bad thing. It's mostly a personal sort of story about the things personal sort of games tend to be about, but the message behind it is positive and heartfelt, if told in a somewhat ambling way. 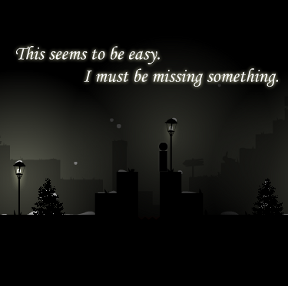 Fading Light's biggest problem is that it's actually also a "trapped in molasses" simulation, which is the only reason I can think of for how stupendously slowly the main character moves and jumps. Maybe the glacial pace adds to the dreamy atmosphere, but it mainly just feels tedious, and even a 30% increase would have been a big relief. While a few odd "puzzle" choices can leave you feeling confused and stuck due to some repetition or limited feedback, Fading Light is still easier than not, and does some creative things with its level design to get its point across. Wildly original? Not quite. Sweet, optimistic, and occasionally pretty neat? Absolutely. Don't expect it to last very long, but Fading Light is still a lovely little flicker of an idea about baggage and moving on.

As mentioned in the review, the main character moves painfully slow. Plus, it's another one of THOSE games..games that tell a story in broad strokes alongside weak platforming in an effort to make some sort of impression. I'm sick to death of people making games like this and not actually doing anything interesting or clever with them. I mean, there are good examples of this kind of game, like One Step Back or Closure, but you have to do more than just stick pretentious words and "sad" music on top of your generic stick-figure platformer for it to have an impact.

What Xindaris said. Somnolently boring. And is the end of the game really

where you just get stuck on the "I have waited for her" screen, or is that a bug?

silent george, that is neither the ending nor a bug. :)

You'll want to use the arrow keys to move to the left, which reveals that you are actually controlling the red female character who is standing in shadow unseen until then.

That is specifically the level I mentioned in the review when I talked about odd puzzle choices. It really should have been made clearer!

Sorry you guys didn't like it, but I thought it was sweet rather than pretentious. :)

I take it this IS made by the same people that made I Saw Her Standing There, and the follow up ?

I think if you have not played the others then this would make far less sense.

I Saw Her Standing There and its sequel were made by krangGAMES. :) This is completely unrelated and has nothing to do with them whatsoever. This is just about

someone who was very depressed, went through a breakup, and that was what finally made him realize he had to stop focusing on the bad things in life and move on.

As I looked at it, the lady in red was the "other" woman, from the sequel, plus the music and the whole stlye especially the part where she saw HIM standing there, before the "other" woman turned up

I enjoyed it for the short break it was anyway - coffee sized !

It makes me think:
https://jayisgames.com/archives/2013/06/night_lights.php

If you're going to make this kind of game, please (1) make the character move faster, (2) deliver some interesting puzzles, and (3) deliver an actual story that has some payoff.

It was boring gameplay wise, but the music makes it pretty sweet and the presentation was cute. Not the first of its kind, but still nice enough. If I played it without music, I'd have found it totally boring.

But the ending was a bit... jarring.

Although the text is supposed to be uplifting and the jump is symbolic, but jumping off a bridge and falling "into the light" sounds/plays too much like suicide. Any fuzzy feelings generated went poof because of the possibly morbid ending. And I have a feeling this might be what the developer is aiming for (since there's other ways to represent "jumping into a new life" than jumping off a bridge and FALLING head first down.

I don't know why, but I am a huge sucker for "games" like this, if only for the depth of the actual content behind the game instead of the game itself. To each their own, I suppose.

1. I found myself in front of stairs... (stop) I think it was a life metaphor.

Walk right, and use the UP arrow key to jump past the steps.

Sometimes, I had to fill the gaps (stop) so I could go further.

Go left, jump up to the top step, jump onto the platform, go right to push down the block, and continue.

Go right, and jump over the spikes. Spikes = bad.

... and obstacles again (stop) but I overcame them.

Go right and jump over the gaps.

I had to find new ways... (stop) or think outside the box.

Go right to the sign (or until you see "or think outside the box"), then go left off the screen. Once the scene changes, go back right.

...but one day (stop) I realized I need to face my problems.

Keep going right, even through the spikes.

I realized that making bad decisions is not all the time a bad thing...

Try to go right and fall to your death. Then fall into the first gap. Take that leap of faith.

Someday I fell. (stop)And I was alone, (stop) in the Darkness.

Remember where the gaps were and jump your blind way through it. There are two gaps.

This seems to be easy. (stop) I must be missing something.

You have to go right to reveal the need for a key, then go back left a screen to find said key. Do notice the gap in the middle.

I saw this man standing here. (stop)I tried to go to him, but he left. (stop) He disappeared into the darkness.

Go to the right. Where did the man go? This is a key event.

It was a dream... (stop) These spikes may be real this time. (stop) Darkness, sometimes, can be my friend...

Go right to the sign / spikes. Then go to the very left of the screen. Then go back right. The spikes should be gone.

And then... I saw HER. (stop) I couldn't think of anything else. (stop) And my mind just went blank.

Make your way to the right. You can stand on the ground where it goes up and down, in fact, those pillars can give you height.

I brought her flowers...

Go left, make your way up, go right and collect the rose, make sure you jump over those spikes and jump to her.

I have waited her. (stop) And she told me what I would never want to hear. (stop) Then, I said "bye" and left.

You are playing the girl this time. Go left, jump over the gap, and meet up with the man. You now control the man. Go left off the screen.

My world turned upside down.

Go right (by pressing RIGHT) and jump over the gaps.

I saw her with somebody else. (stop) This bridge can also be a life metaphor... I decided to leave her behind and "jump" into a new life.

Go right. Get ready for a heart attack.

Gah. After writing this up and playing this for the second time, I am very much ready for something more along the lines of The Company of Myself. At least that wasn't this slow...

When the review said trapped in molasses, I seriously underestimated how painfully slow the character moves. I fell asleep with my fingers on the arrow keys for large portions of some of the scenes. Gameplay is a solid BEEN-DONE/10 with points deducted for how agonizingly, painfully, boringly slow the movement was (really cannot stress how god awful it is). And that's a generous score, because I'm a sucker for platformers.

I really don't mind the unoriginality of the genre, but please, please, please pick up that pace. I have somewhere to be in three hours and the story isn't worth the wait.