They say crime doesn't pay, but they were probably talking about jail or, at worst, being hunted down by Dog Chapman and not, say, an unspeakable horror lurking inside the house you decided to rob. In Paulina Pabis' horror action game Eyes - The Horror Game, your goal is to get in, grab all the loot you can, and get out before the grisly spirit inside finds you. The catch, apart from the spectre on your tail? Each time you play the location of the treasure is randomised, and all you can really do is run and hide and probably cry a little when you're being chased. Fortunately for you, there are eye symbols hidden throughout the manor that will allow you to see through the eyes of the ghost, which is helpful when you're trying to plan the escape route, or want to know if you should be spending your final moment sucking your thumb in the fetal position. Maybe next time, leave this sort of thing to someone more qualified, like Trilby? 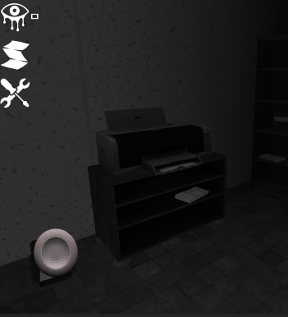 The game plays with a control stick on the left to move, and swiping on the right to look around. You can tap items to interact, though some of them will be automatically added to your inventory. Tap the map to see where you've been, or the eye icon if you have any left to briefly look through Ghost-o-Vision... which can take some interpretation, since our ghost apparently sees things differently than we do, but can help you figure out where your stalker is. If it gets close, you'll know since the game will prompt you to run, and if you're caught, it's game over. There are, however, sounds and supernatural phenomena that generally precede the ghost's appearance, so keep your eyes and ears open. The game also has a free browser version that plays exactly the same, but is controlled with [WASD] to movement, the mouse to look around and pick things up, [Q] to activate ghost sight, and [M] to view your map.

Conceptually, the game is almost identical to Slender, with the by now old fashioned formula of "find a bunch of random stuff without getting caught by a monster". But where a lot of your success in Slender was dependant on luck, Eyes allows you to plan and spy and run rather than being caught by a GAME OVER simply because your antagonist can teleport and you can't. Of course, it would be easier to run if the dual-stickish controls didn't take some getting used to and doors opened with more expediency. Eyes is, admittedly, something of a one-trick pony. There's only one level, essentially, though the randomisation of item distribution allows for lots of replay, and the story is essentially non-existent. What it's got, however, is some stupendously eerie atmosphere and scares with not a lot of gore and no violence at all. It may be simple, but Eyes - The Horror Game is a stylishly scary funhouse of horror. It's practically begging to be expanded into a full-fledged adventure game, but in the meantime, for a fast freaky fix of fear, it's a great choice... especially with the lights turned out.

I didn't get far as I was way too freaked out D:

What plug-in do I need to play this?

For future reference, at the top of the review next to "platform" will always display what the game is coded in, and clicking on any links there (such as Flash or Unity) will always take you to whatever plugin you need to download. :)

I couldn't go past the first room.

No, it's not because the game crash or something like that.

It's just that I'm scared out of my mind just from those creepy atmosphere, and I still want to be able to sleep at night, thank you. So, no. I won't play this game - yet. Perhaps one day I will.

I could also say the same thing for "the house 2".

??? NO WALKTHROUGH ???
:{```````
I ALWAYS prefer the TEXT walkthroughs of:
Grinnyp,
Questioner,
&
SONICLOVER - who is my ABSOLUTE FAVORITE walk-through-er, but we're not voting here or anything...
("walk-through-er"?)
I am SURE there are a couple more walkthroughers I cannot think of at the moment but anyway, that aside, I suppose that it is futile for me to expect a JIG-TEXT walkthrough at this point.(not even 2years later?)hehe
OK.....ON to YouTube this babbling-genius-wannabe goes, for a video walkthrough...and I pray there IS one.
(And yeah, I am accurate and well aware in the self-labeling in the previous sentence. But hey, being admitting there is a problem is the first step, right?)

One of my favorite and scariest unity game. I enjoy and i play it most of the time at Horror Scary Games Website along with other horror games!