Prepare to get your shriek on with the free indie horror action adventure game Erie by the University of Utah's EAE Master Games Studio Program. When a nuclear generator suffers a partial meltdown in 1966 Michigan and the locals start disappearing, your helpless unarmed kiester is dropped in alone by the Red Cross to investigate what's going on under the shores of Lake Erie. Naturally, it turns out a can of spray paint isn't going to cut it against whatever unpleasantness is lurking underground, and it's up to you to survive and track down a bunch of dead cats because of course you have to in one crazy but intense experience. 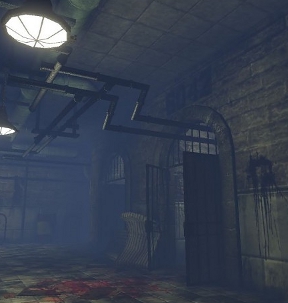 Use the [WASD] or [arrow] keys to move, using the mouse to look around and holding [shift] to sprint. Which you'll want to do, since your only defense from the things after you is running away. [E] interacts with most objects, and [I] will display your inventory and everything you've found so far. [Spacebar] jumps and [C] will let you crawl, since no first-person horror adventure is complete without slogging through sewers. The spray paint you get early on can be used to tag ways to keep track of where you've been, which can be helpful the farther you go in the facility, and trust me when I say you'll want to make an effort to remember where the exists in each room and handy tunnels to escape in. I wasn't kidding about the cats, either. If you hear an ungodly caterwauling, search the area for a kitty corpse (ugh). I look forward to seeing how our hero explains to his superiors his apparent desire to haul dead animals around with him on his mission of mercy. Oh, and you can't save your game either, so be prepared to finish this one in one go, though you can hit [ESC] if you need to pause, and if you do kick the bucket, the game will respawn you at a checkpoint.

Erie is one big, hulking, menacing monster of a game, but it's also a little clunky and simplistic in its concept and overall design. Despite that, Erie is actually a lot of fun. The environments feel appropriately lonely and oppressing, and though its heavily reliance on jump scares means it never reaches the more elegant horror of, say, Amnesia: The Dark Descent and limits its audience, they're certainly effective when they happen. It takes a while to really get going, but once it does, it'll have you squealing and jumping at every noise even as you run for your life. And also, well, it's free, and pretty darn impressive for something made by a bunch of students. The biggest challenge is largely keeping track of where you've been so you know where to run when you're trying to avoid something on your way to open doors or look for keys, but fans of cheesy monster action movies looking for something fun and freaky to sink their teeth into for an evening will find a lot to like here, and makes for one wild, if not necessarily relaxing, experience.

"The biggest challenge is largely keeping track of where you've been..."

That's never been a good selling point for me. "Do you have good memory, or not?" is a particularly frustrating form of fake difficulty. That said, there are few enough horror titles out there (disregarding gloomy horror-in-name-only "spot the hidden object" shovelware) that I'm probably going to end up trying this anyway. The spraypaint thing does sound like a rather novel way to address exploration as a challenge, so maybe this'll be worthwhile.

And as a followup: That actually wasn't too bad. Silly and low-budget, naturally. But the layout was basically linear except for one area, which was made more manageable by the in-game spraypaint letting you mark up the map without having to resort to such tedium as real-world pencils and paper. The creature designs were patently silly, but they offset that a little by making effective use of sound cues.