Glen Forrester knows your secret. Your wish to be surrounded by a flood of tiny, shrill-voiced men in overalls and suspenders to carry out your bidding. That's why we've got Enough Plumbers 2, the puzzle platforming sequel to the original game about spawning herds of tiny plumbers. No, not that guy. These plumbers are totally different. Use the [arrow] keys to move and jump, and hit [spacebar] to reset a stage, heading for each levels tiny flag to win and jumping on (most) enemies to destroy them. The idea is every time you touch a coin, you spawn another plumber that moves in tandem with the others, and while you only need one to survive to win in most cases, you'll quickly discover they're not all as expendable as you thought... especially once the power-ups begin to be introduced, and they only apply to the single plumber that grabbed them. 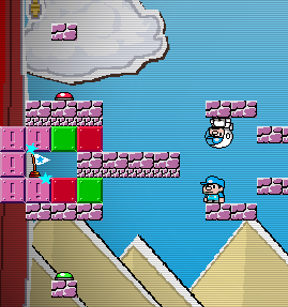 Like its predecessor, Enough Plumbers 2 ramps up the difficulty alarmingly fast, though this time through it does feel like there's a bit more emphasis on puzzling out a level solution beyond simple demand for high skill and reflex. Don't worry, though, there's still plenty of challenge! Aside from a slight graphical shift, the biggest changes are primarily to the variety of things you encounter. New power-ups such as the Ghost and the Spaceman are available, and figuring out how to use those effectively to get through stages is a lot of fun... even if it is weird for the Ghost to be able to pass through solid walls but still take damage from enemies and hazards. As before, sometimes the biggest challenge isn't even the many obstacles in your path but the overload of visual stimuli as you try to keep track of every single plumber at once, but while I would hesitate to call it more difficult than the original, I would call it more creative and better at keeping your attention by adding more elements throughout the whole game. It's a sometimes infuriating but always entertaining game, and the carefully crafted stages don't tend to drag the way they did in the original. You'll need fast fingers and patience to see this one through, but Enough Plumbers 2 has the polish and creativity to make it worth it.

Very fun! and that horribly drawn face that appears when you beat a level makes me laugh every time :D

And yes, agreed @Diego, that face is priceless!

Tons of fun and well done. Any clues on the final level?

using the iceblocks to KO the skeleton early on, but I guess I died before the flag came up

and so discounted it and spent a long time burning around doing other things.

Just finished this game... this sequel is a just as fun if not better than the first... Liked the several Wii Super Mario style mystery levels in this as well ... very clever! Excellent ideas with the gravity suit, bat-plumber, mini-plumber and Yoshi frog! The boss level is a real pain but I guess that is what makes it a good boss level ...

Great game, once again one of my favorites!