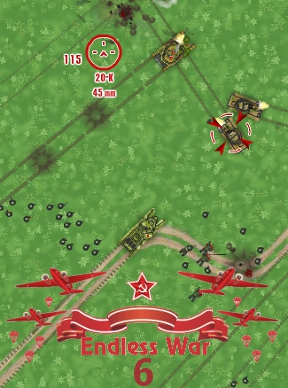 Greetings, comrade! Welcome to the Red Army! The pay is bad, but at least the hours are long! But hey, that 50-ton tank is sure to make a few Germans quake in their jackboots, nyet? Try not to explode too many of your fellow soliders, da? Da. Endless War 6 is a campaign strategy game by Vitaly Zaborov that places you right in the middle of the pitched battles of World War II's Eastern Front.

Move with [WASD], and aim and fire by clicking the mouse. Your turrets will need time to get in place, so plan your timing accordingly. Switch between your various weapons with [F]/[G], and, if your tank has multiple turrets, switch between them with [Q]/[E]. The CPU will take care of firing your other turret, but different situations call for the personal touch. Once its meter fills over time, call in air strikes with [spacebar]. Completing missions unlocks various upgrades and new tank designs. Though it has some of the trappings of an arena shooter, it's best to approach it with real-time tactical combat in mind. The tank you're controlling is a big lumbering creature and your shots will need to be well-aimed for maximum effectiveness. Some may find it too slow for that reason, along with the heavy CPU load. However, fans of military games should appreciate its realistic strategic considerations and customization options, and be happy to give it a good Na Zdorovye!

1,725 Views
1 Comment
chrpa— Jayisgames needs your help to continue providing quality content. Click for details After investigator Roberts and his companion Atzalar together with professor Fargleton successfully got rid of an ancient fearsome demon, Farold Roberts with Atzalar go to the abandoned factory...  ...

444 Views
0 Comments
jayisgames.com— Who doesn't enjoy gaming? Especially online gaming. It is a great way to unwind after a long day and transport yourself to a different world. There is a wide variety of games you could enjoy but irrespective of what kind...  ...