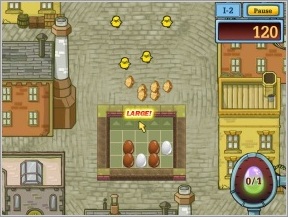 Ever wanted to fight a revolutionary struggle against tyrannical chickens by lining up eggs and firing away? If you answered no, you haven't played the downloadable Egg Vs. Chicken for Windows and Mac. A charmingly original action/puzzle game from the luminaries at gameLab (whose other excellent titles, such as Plantasia and Arcadia, have been reviewed here), Egg Vs. Chicken puts you in the role of time-traveling Eggs trying to free the un-hatched from a history of oppression.

Each level of the game holes you up in a differently shaped fortress with Chicken guerillas enclosing from every side. To hold off their attack, you have to line up colored eggs along the walls, and then fire away. The core of the game involves sliding the eggs around and organizing them for the fight. The catch is that an egg will move in a straight line until it collides with something. You simply click on an egg and gently flick the mouse to move it in one of four directions, but the process can become hectic, especially with the beaks of belligerence tapping on your walls. Theres nothing more satisfying, however, than lining up a deep stack on a corner and yoking out your foes from two sides at once.

Innovative stuff like this can't really be done justice in words, the only way to really appreciate Egg Vs. Chicken is to grab the game and start playing.

Yes this is indeed a nice casual game!

Its a playing concept I've never player in this setting before. And its nicely embedded in a comedian Theme!

While I personally tend to very critical reviews, I grat. to this one. Leaves not much to complaign about, except maybe the addiction factor somehow fails for me. However I cannot point a finger down, why I can resist from playing it for hours...

Whats up this game is weird but funny...

This game is a awesome game to play eggs hitting chicken until they're dead is really fun I play it all the time since I got my new computer last year in 2006. They give computers this game so people can have fun and enjoy games for 60 minutes or 60 seconds.

hi im BlackSheep and im a game critic u probobly dont know me but im just going around and rating.this games rating is

cute game that i loved to play it was so funny and i thought it was a great idea. have a great day!

ps. vmk is my all overall 10/10 its the greatest game and my name is SUN_SHINE