Dyna Boy, what is the secret of your power? Well, presumably an absorbent mixture of diatomaceous earth and sodium carbonate soaked in nitroglycerin and formed into paper wrapped sticks. That then goes boom. But trapped in a dark and mysterious mine as he is, beset by cave creatures of all kind, who could begrudge him a little detonation? Dyna Boy is a retro platform game by Neutronized where things start explodey and just get explodier. 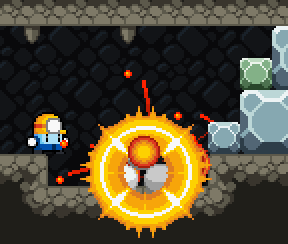 Move, climb, and jump with the [WASD] or [arrow] keys, making your way to the exit of each area. There are pieces of dynamite to collect, which you can light and drop with the [spacebar] (which also throws a stick when jumping) to clear obstacles, defeat enemies or unearth bonuses. Keys can be collected to unlock doors and bonus gems for extra points. While Dyna Boy has a certain familiarity about it, especially in comparison to other games by the developer, its smooth and intuitive gameplay make it easy to lose yourself in it, especially with some of the physics puzzles offered in the later levels. Platformer fans are sure to have a blas-... a good time through all 15 levels of Dyna Boy.

Satisfying explosions. Controls are a bit sticky but didn't affect gameplay for me. Some of the TNT respawns; restarting also resets your score, which amps up the puzzling challenge.

its a minion ,right??

Can't be a minion.

Minions wear black gloves and have black straps on their goggles. Dyna Boy is obviously wearing white gloves and has a red strap.

This was a great game! Great detail in making it, it reminded me of Super Mario World. Highly satisfying.

The music was repetitive, but since I typically mute the music anyways that wasn't an issue. It wasn't good enough to leave on, unlike some games.

I also think there is a LOT of room for innovation, particularly when it comes to interacting with the environment. Those "bridges" you make, I would have liked to have seen a LOT more contraptions like that. The physics were pretty well done, and it could have been used a lot more, like in Nitrome's Canary.

In all, I really enjoyed this, and would like to see a sequel that expands on the concepts and exploits them further.

He's wearing a hard hat with a light on it. That light blue bit in his midsection is his face, and those black lines are his eyes.

Fun game. I agree with LightWarriorK about the improvements. Once my attention was diverted I found I had lost interest.