It's not often one can look at a racing game and say "Wow, that appeals to a wide audience!" Cubed Rally Redline is one of those games. Created by No Can Win, this pixel art racing game has more in common with mission-based arcade games like Jetpack Joyride than your average racer. Hit the track, jump a few ponds, dodge some cows, and see how far you can go without crashing. 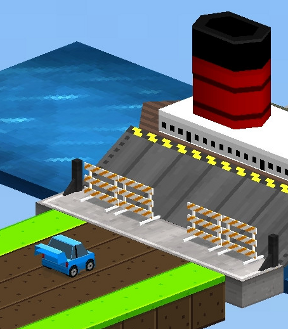 The track has five paths you can switch between by tapping the sides of the screen. All you have to do is keep driving and hop lanes before you hit anything, occasionally tapping the brake to buy you some time. A special drifting power-up lets you earn some bonus points (and look really cool), while fuel cans replenish your gas meter, which slowly depletes the longer you race. You can also pick up coins and spend them on nifty new vehicles to smash into things!

Cubed Rally Redline keeps everything nice and simple, stripping out most in-app purchases in favor of a single currency and a single type of upgrade. The main endless mode lets you race over and over again to see how long you can survive, while rally mode (unlockable with an in-app purchase) gives a slightly more traditional racing experience. It's good old fashioned arcade gaming with a touch of modern flair.