Crazy Machines:
New from the Lab

Ready for more buildings, contraptions, machines, and inventions? Crazy Machines: New from the Lab is another resurrected hit from German game developers FAKT Software. Featuring gameplay very similar to The Incredible Machine, Crazy Machines features over 100 new levels, each one more complex (and zany) as the last. 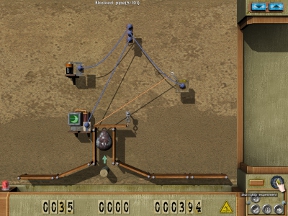 Like any building game, the scene is still to start with, and your goal appears in a small window right off the bat. Choose an item from your inventory and place it on the screen. You can usually rotate, flip, or otherwise manipulate objects using the circular menu that appears after you click on the item. Precise placement is very important, so don't neglect fine-tuning your machine. Once you think everything is in place, hit the switch and set everything in motion. If necessary, you can always reset the machine, tweak your design, and try it again.

Each level in Crazy Machines: New from the Lab has a specific task you need to complete. Usually this is something along the lines of towing a ball to a certain point, hitting a few switches, or building a machine to pull a weight out of an enclosure. Goals get more complex as the stages go by, and before you know it, you'll be using dozens of parts to craft a machination as slapdash in appearance as it is beastly in function!

Just like Crazy Machines: Inventor Training Camp before it, New from the Lab comes with a free-for-all laboratory that gives you a clean blueprint you can use to build anything your twisted mind can conjure. All 100 or so pieces of machinery are available, from platforms to plugs, motors to generators, and you can do with them as you please. Build, save, and load inventions from the menu, and let the creativity flow! 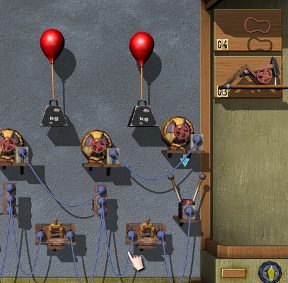 Analysis: After hits like Armadillo Run, Eets, and The Incredible Machine, no one should be a stranger to building games of this nature. Crazy Machines: New from the Lab is, as far as the look, feel, and mechanics are concerned, practically the same game as the titles that came before it. It's hard to say no to over 100 new levels, however, and before you know it, you'll be back in the workshop, laying planks and running cables so you can reverse gravity and pull an iron bell out of the drain!

The physics in Crazy Machines are spot-on and mimic real-life situations with a fun sort of accuracy. Placing and manipulating objects is also handled with ease, allowing you to perform fine movements without fumbling over your often complex creations. Somehow the game seems to know I'm trying to grab the belt instead of the wheel it's attached to. Thank you for being psychic, Crazy Machines.

Some of the extra, "casual friendly" features in Crazy Machines are a bit on the annoying side. The biggest facepalm-inducing inclusion is the professor, whose big rendered head likes to appear at regular intervals, spouting a few pointless lines intended to lighten the atmosphere. PROTIP: Go to the options menu, look on the top of the righthand column, and turn the professor off. You can thank me later.

You really can't go wrong with a good, solid physics-based building game. Crazy Machines is one of the best around. It's accessible to just about any player, features a good interface loaded with great puzzles, and playing around with the "sandbox" lab is more fun than it should be!

Oh, I didn't expect for this, since crazy machine II is already out for long.