Here we have it: Chrono Trigger on Android and iOS! Just the mention of the game's name will stir a lot of emotions in people, and not just those of us who were around for the original release. Almost 20 years ago, a dream team of designers and artists at Square (now Square Enix) got together to make a game with a silent protagonist who forms friendships with people throughout time in an effort to save the world from a most insidious form of evil. It had memorable locations, epic battles, emotionally charged sub-plots, and multiple endings. Chrono Trigger helped shape the RPG genre for years afterwards, and as the recent mobile ports prove, it's just as relevant and stirring as ever. 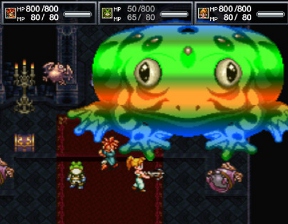 Gameplay will be familiar to anyone who has played an RPG since the '90s. It all starts with Chrono sleeping in his bed, napping the day away as is the norm for role playing mega-hero-types. He eventually heads out to attend Guardia's Millennial Fair, where his friend Lucca is showing off a brand new invention guaranteed to impress. Naturally, nothing goes quite as expected, and Chrono soon finds himself traveling through time to save a girl he just met, restore the honor of a frog knight, rescue a robot from the destitute future, save a crumbling kingdom, befriend a malefic mage, and put a stop to a formidable evil destroying the world in the past, present, and future.

The mobile ports of Chrono Trigger are a reworked version of the Nintendo DS port released in 2008, itself an improved version of the PlayStation port from a few years earlier. The changes made were small but significant enough to make players familiar with the game to squint an eye or two. New content was added in the form of animated cutscenes and a few additional dungeons, so even veterans had a few excuses to hop in and play it through one more time. With the iOS and Android versions, the biggest change is the interface update for touch-based controls. A virtual analog stick appears whenever you touch the left side of the screen, allowing you to move around and navigate menus. Everything else is presented with an easy to prod box element, including battle options and equipment menu screens. 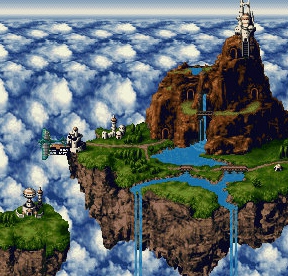 Analysis: No matter what you say about the ports or what you feel about the re-re-releasing of an old game, you can't ignore this simple fact: it's Chrono Trigger! None of the ports of the SNES release have been pitch-perfect, but the mobile releases are perfectly serviceable for anyone with a touch screen device, tablet or otherwise. Only codgery gamers such as this reviewer will scrutinize the slight changes in text and sound effects, but if you set aside the nostalgic glasses for a few hours, it's hard to find any serious flaws to complain about.

One of the obvious downsides to Chrono Trigger on iOS/Android is the price. Square Enix charges a premium for its games, even ports of decades-old releases. While this would be justified in the console and PC markets, it doesn't fit the mobile economy very well, and as a result it's a bit shocking to see. It would be extremely difficult to sell anything at these prices if it didn't have an established franchise name to flaunt, especially when compared to indie-made games that exist for a fraction of the price. It's a hurdle, to be sure, but one of a questionable economical philosophy, not a gameplay quality issue. 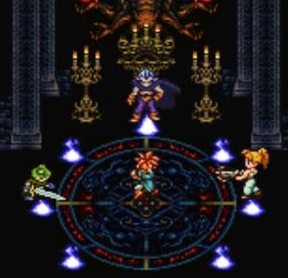 Since we're down to splitting hairs, there are a few things worth noting about the mobile versions of Chrono Trigger that just don't seem to make sense. For starters: why the blurry visuals? It's sometimes painfully obvious which elements were added for iOS and Android when compared to the original content, which shouldn't have a problem being displayed with sharp edges seeing as how it's pixel artwork. It doesn't detract from the game so much, but it's noticeable, and it really shouldn't be for the price you're paying. Also, expect to spend some time learning the touch controls before you can navigate with confidence. Sliding virtual buttons are a poor replacement for a solid gamepad.

Chrono Trigger is one of the ten games every gamer should be familiar with at least on some level. It was crafted with precision and passion, and it holds up just as well today as it did in 1995. The mobile ports are good but not quite perfect, especially when analyzed with the Glasses of Nostalgia +10. But it's an absolutely epic game, and having a mobile version of Chrono Trigger to carry around everywhere you go can't be a bad thing!

I'm glad more people will the opportunity to experience this classic. I will stick to my DS version; it's portable enough for me.

Reviews in the App store, as well as images I've seen online, seem to imply that the quality of sprites and artwork in this port aren't quite as crisp or clear as the required $10 would imply. The last port I got was a FF game that looked great on my old 3GS, but based on the googling I've done to find some images, I don't think I'll be purchasing.