Being a robot isn't always fun. Whereas other robots get to chase after pets and use grappling hooks to navigate flashy environments, Cargo-Bot is stuck picking up and putting down colored crates in a nondescript warehouse. Ah, well. Such is the life of a robot. 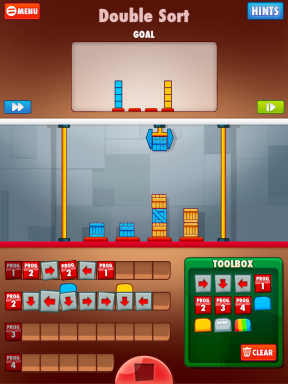 As a neat little puzzle game by Two Lives Left, Cargo-Bot's premise is simple: program a robotic crane to rearrange crates so they match the layout at the top of the screen. The method by which you do so is similar to our old favorite Light-Bot 2.0: drag and drop instructions on and off the four command bars on the left until you've got something good, then hit the play button at the bottom to see how she runs. The fewer instructions your program uses, the better your star ranking will be if it works. Suffice it to say that you'll have to worry about a handful of subroutines, conditional instructions (e.g. only move the crane left if it's holding a yellow crate), stacks of recursive calls, and many clever combinations of the above throughout the game's 36 levels.

The clever and brainteasing puzzles, adorably minimalistic soundtrack, and clear yet non-distracting graphics are more than worth the price of admission alone (it'd have to be, the app is free), but what really makes Cargo-Bot special is that it's the first game to hit the App Store that bears the distinction of having been created entirely on an iPad, using Codea. Codea is another iPad app from Two Lives Left, a programming utility designed for creating games and simulations. The gameplay, music, the cool physics effects when the crane crashes into a wall—it was all done on Codea.

Cargo-Bot is a first, and it's a really good first. If you've got an iPad, grabbing this game will be the best decision you made since you started to read this review!

Suppose you have a pile of 4 crates that you want to move one position to the right. (Screenshot)

Coming Soon!
If you have a shorter solution than one posted here, please post a screenshot of the formula and we'll add it here.
Tutorials

This is still a work in progress, filling in the blanks as quickly as I can. Contributions welcome! :)

This quickly became one of my all-time favorite games. I hope we get a level-editor added to it soon.

Suppose you have a pile of 4 crates that you want to move one position to the right. (Screenshot)

Coming Soon!
If you have a shorter solution than one posted here, please post a screenshot of the formula and we'll add it here.
Tutorials

This is still a work in progress, filling in the blanks as quickly as I can. Contributions welcome! :)

This quickly became one of my all-time favorite games. I hope we get a level-editor added to it soon.

I found a 6 register solution for Medium Clarity

Do the following in P1 only:

Down
Right if none
Right
Down if green
Left
P1

I have a 7-register solution for "The Stacker" (Medium Level 5):
Screenshot here.

Some unknown solution I've got:

So effectively you're just doing a reverse "Lay it out" on this level...

A 5 register solution for double flip in easy:

prog1:
down
right if color
right if blue
left if none
prog1