I don't know why it is that something bad inevitably takes place when you send a small crew to space and cram them together in a ship for months on end. But a lot of great sci-fi stories wouldn't exist without that premise, and now we've got another one to add to the list. A narrative-driven exploration game, Captain Robert by Galen Koehne takes place on a space ship where something mysterious is going on. It's up to you to figure out what happened to your crew and get out alive. 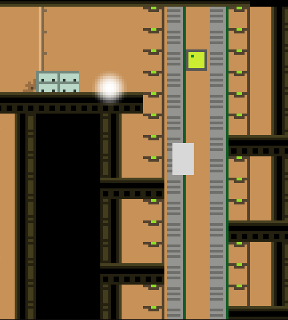 Use the [arrow] keys to move, and the [x] key to advance through text, open doors, or otherwise interact with the world. You'll find different keycards around the ship. Watch the upper left hand corner of the screen to keep track of what color doors you can currently access. Once you discover the gravity override, press the [c] button to toggle low gravity. The gameplay itself isn't difficult, but it is satisfying to slowly gain access to the whole ship while piecing together the mysterious happenings. Every new tidbit of information you glean only serves to make you keep going to find out more. You get a pretty clear picture of what happened by the end of the game, though the ending itself is open to interpretation. However tempted you might be, don't get out that Sharpie and draw a face on Captain Robert. You'll thank me later. Yes, he looks like a big white rectangle, but the game was made in only 48 hours for the most recent Ludum Dare competition, so don't let it bother you. Just get going and explore your ship.

Good story, well laid out, but

that ending is REALLY abrupt. I mean, I'm all for open to interpretation, but that just felt unfinished.

Jump up through the bluish-lined wall in the lower left corner of the map (with gravity off) and you'll go straight through. Explore for Easter Eggs!

I agree the ending was a bit... anticlimactic. Also could really use a map.

There are several places where you can jump through the ceiling of various rooms to get outside the ship, but I've yet to find a way to reach the item which is visible outside Julie's greenhouse.

@Cale, I am with you could not see away to get the glowy outside the garden.

I didn't mind the captain being a blob myself, the story itself built up really well and had me hooked from the start.

As for the ending

A touch frustrating I really wanted to know if the captain was the alien or not !

I loved the easter egg hunt. I found...

GK, Hi! and a random little plant room. I never managed to find a way to the item near Julie's greenhouse that Cale mentioned either

I had no problem with the anticlimactic end since the whole story kept hinting (like Captain Obvious hints) at how it would end.

Captain Robert was in the store room this whole time. You are the alien.

I think if the game had explained and shown me everything it would have been a bit patronising.

The item outside Julie's greenhouse �

Is a note telling you that you can hit Q to fly and pass through walls.

Seriously needs an in-game map to show you where you've already been.

I agree. A mini-map would do wonders for making the game less frustrating.

Still, given the short development time, it's not bad.

If the developer finds the time, this could be extended into a really, really good stand-alone game.

Considering the amount of time invested in it, this is quite a nice game. Me like.

About that secret note:

It turns out you can't fly with Q until after you read it. Also, it turns out it's not easy to find the right path; I was just lucky the first time.

So, I'll write up how to get to it. It looks like only one exit leads there, the one through the blue ceiling in the room just left of the escape pod, on the way to the cockpit. Keep going left until you get to the giant GK. You need to jump into the area just above it. There's also a little alcove right where the GK is, but it doesn't go anywhere, and jumping to where you need to be from there is harder than jumping from the lower area. Once you're there, you should be able to jump up a long shaft and find a little path to the left that lets you get above the green room. From there it's just a massive jump up and to the right to get to a long walkway where it's hard to tell you're even moving because you can't see anything most of the way. Then just fall down, head left to the white, upside-down Y thing, and make your way up.

I agree a map would have been helpful, I had a couple of near-quits when I got lost.

But the ending, I liked. That's what suspense is!

Am I the only one who thought

The player being a blob was a hint you were the alien, and had no-one left to shape-shift into?

isikyus: Oh, clever idea! Even if it was really just due to the time frame for making the game, I think your suggestion is a bonus.

I am slightly disappointed that despite the the ability to get into the escape pod, you are unable to fire it off.

i agree, the ending is just like mission(or whatever it is) dont want you to go in and when you do that game ends and starts like the first time you go in.

Captain Robert is a decently-executed spin-off of the Alien story but, mostly due to the fact that it was made in 48 hours, doesn’t have the tense atmosphere or memorable player choices that would have propelled it to a thoroughly engrossing experience.

The gameplay consists entirely of exploring your lifeless ship as Captain Robert, who must not only find his crew but also a way off the barren vessel. On his journey, Robert interacts with his superiors at Mission Control and slowly they piece together the true horrors that lie aboard the ship. While the dialogue improves drastically near the story’s conclusion, I wish that the Mission Control voice would have been discarded altogether. Not only does he hold your hand through a majority of the game but he also interferes with the feeling of hopeless solitude that the space genre thrives upon.

Platforming is consistent throughout as a rectangular Robert explores each level of the ship. However, the fun truly begins once the low-gravity feature has been obtained and there are no limits to the places you can search. I even found myself exiting the ship at times and finding hidden easter eggs in the farthest reaches of outer space.

Overall, Captain Robert is a pretty fun game. While I would have enjoyed a tenser atmosphere and a deviation from established space clichés, the game is able to pull through due to entertaining exploration and a satisfyingly open-ended conclusion.

1,879 Views
5 Comments
chrpa— Jayisgames needs your help to continue providing quality content. Click for details Hi, the new Weekday Escape is here! With Selfdefiant you visit shortly Colorado and Connecticut, and then comes Amajeto with their latest game in a new style...  ...