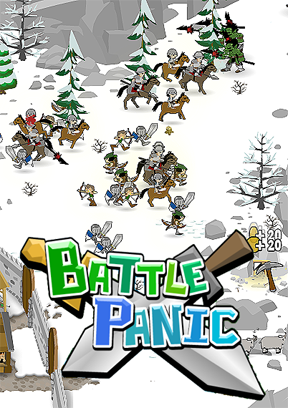 Just what are orcs exactly? Are they demons from the deepest depths of h-e-double-hockeysticks, trolls that live under bridges quizzing all those that wish to pass, or are they just a figment of some British guy's imagination? In any case, you don't need to be a Tolkien scholar to know that when a orc is a comin', you best start a runnin'. Unless, of course, you're feeling all brave and stuff, and want a challenge.

In Battle Panic, a new strategy defense game by Ninja Kiwi, your kingdom has been overrun by the orcish horde and it's up to you to take back what's yours and bring the fight to the enemy's homeland. In each level you begin with basic defenses and some starting resources. You have about a minute to mine or build buildings and units before the orc army approaches.

It's a familiar concept, but what makes Battle Panic stand out is its controls. To build, heal, destroy, and mine, just place your cursor over the object you want to interact with. No clicking required, except to summon reinforcements or buy resources. You can join in the fight by placing your cursor over an enemy and watch as it turns into a big sword that does deadly damage. It can be upgraded along with your three basic units—foot soldier, archer, and cavalry. You can also play medic by placing your cursor over your own troops and watch as a pleasing golden aura surrounds and heals them. This is where the strategy comes in. Your cursor can only be in one place at a time, so you'll need to decide where your energy is best spent—on the battlefield, in the gold mines and forest, or at home shoring up your defenses. The basic idea behind Battle Panic is nothing new, but the game is polished, with good graphics and sound effects, tons of upgrades, and, at about a dozen levels, will provide you with all the blood and orc guts you can handle for an afternoon.

I am officially obsessed with this game.

So far, a fairly strong strategy for most of the normal mode has been:


This would be AWESOME on a touch screen.

I found it unplayable. It's actually like watching progress bars move - only you can't look at another screen whilst doing so.

I liked it. Not manning any tabs is great, but I did find it hard to heal/fight in crowds. Many times I also tried to fight when a tree got in my way.

liked the gameplay to choose between the tasks

got to panic difficulty quite fast, with some upgrades a lot of the levels was quite easy with
the upgrades so the reinforcement and "repair" strategy worked in most levels

but panic 10 problems start, at wave 11 all my army diesm tried different strategys but doesn't work
seems that i either have to get all the start i missed (9) or its only doable with the shop
but the level is harder than any before

I am officially obsessed with this game.

So far, a fairly strong strategy for most of the normal mode has been:


This would be AWESOME on a touch screen.

I've made my way through most of the panic level but not all just yet.

Get all the buildings upgrades initially. You need the final one.

1) Earn 1000 gold and 250 wood and upgrade base. Ignore enemies apart from spear throwers which are quick to kill with sword cursor.

3) Earn another 1400 gold and 350 wood and upgrade base almost but not quite to the final level.

5) Earn as much gold / wood as you can whilst waiting for your base to drop to 80% health.

6) When footmen / archers come out of base, generate as many horseman as possible to back them up.

7) Once bad guys around your base have been destroyed, finish upgrading to the next level. This will restore some of the health of your base - hopefully to maximum. This important for the end score.

Depending on how I feel I sometimes create archers but most of the time I just produce horsemen. Seems to work and gives three stars on most levels.

Well I've made it through to level 100 on Willow Glen. However this was due to an infinite life bug.

Something went wrong - don't know what - and regenerating a single soldier causes multiple soldiers to be generated. I had 1000 bowmen and 1000 horsemen, which made life easier.

it is rather red, big and nasty...

On these levels, the amount of gold you can collect is limited so I can't see that it is possible to get much past level 80 (and the new bad guy) without a cheat.

If anybody has found a way to get 3 starts on Windmoor / Panic then I would be interested to know how? Otherwise I have three stars on Panic apart from Goldvale (2 stars) and Deadwood (not completed).

@MdB
Windmoor Panic is hard mostly because it's so time constrained.
Ignore everything and resource farm.
Upgrade castle to level 2 and keep farming.
Once castle hp goes to 80%, upgrade a 2nd time (time this so it occurs very close to the last guy dying - this way your castle hp is near max).

I can't remember clearly, but I don't think you have enough time to build a barracks/spam soldiers.

My problem right now is that Deadwood panic is unbeatable. I have every single star before it, as well as 2 from freeplay. My units have a 22% dmg bonus, but they keep getting crushed like flies. My sword obviously can't kill a screen full of monsters.