Being an archer in a group of adventurers is sort of like being a bassist in a rock band. You get zero recognition, no matter how hard you try. But the good thing about archers is that, unlike bassists, they can go solo. The hero of the action-packed Barons Gate 2 by Dragosha Games decided to do just that. When his queen gets kidnapped by a dragon, he bravely sets out on an epic quest all on his own, Eye of the Tiger playing in his mind as he dreams of the glory he won't have to share with paladins and mages and the whole ungrateful crew. Shooting is as easy as clicking, and the position of the cursor determines the power and direction of your shots. Arrows alone won't be enough, though; defeating demons calls for good armor, which you can buy by visiting the camp, or find it in treasure chests. For the most part, Barons Gate 2 follows the formula established by its predecessor. Many elements are completely unchanged: the levels are short, your enemies range from sword-wielding knuckleheads to flying fire mages, and the gameplay is stopped every now and then for a visit to the camp. 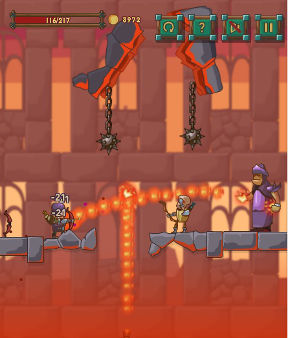 This installment brings the much needed inventory, accessed by pressing [I] or clicking on the hero's portrait. You can now hoard stuff, which comes in handy when you realise you can also buy gems to upgrade your weapons or armor in many different ways. This makes the game that bit more tactical, especially when gem upgrades are combined with potions, which can increase your damage or agility. Unfortunately, you still can't sell items, but rather just toss them aside. They'll be waiting for you right were you drop them, but usually you'd much rather have the cash instead. The combat is simple enough, as long as you remember to aim for the head and also that respawn stones are your best friends, so activate them as soon as you can reach them. Barons Gate 2 ranges from pretty easy to curse-at-the-screen difficult in the last few stages, when it brings on rotating platforms and fire-spitting chasms. It certainly seems shorter than the previous game and there is a palpable lack of a story, but it has a sort of Super Medieval Mario feel to it... this is a good thing, in case you were wondering. With a bit more ambition, this could have been an epic adventure with hours of gameplay. As it is, it's a brief Sunday-afternoon piece of actiony entertainment, and its high production standards and replay value (gotta get those achievements!) make it worth your time.

If you google the walkthru, you'll see how the player uses a glitch to cheat his way past numerous levels without even playing them.

My character keeps completely disappearing on the first level. Combined with the mention of a 'walkthrough' where the player glitches past levels without even bothering to play them I'm not impressed and won't come back for this until the bugs are fixed.

level 11 sucks, had to replay it 20 times before the flimsy box below the chest managed to not get shot before I could get up there.

20 is pretty bad too. I don't see how you could win without dying seeing how it is so easy to be flung off the platform.

The ending, really, after all that work?

This could have been better. It was more playable, at least on a laptop, than some other games, but things like the unsturdy boxes that just blew away in two shots that you had to have to get up high just killed the mood.

Very nice. I just wanted to say thank you for sharing a great information and useful. it really necessary and timely for me at this time. I've read a lot of blogs and visit but they made me feel boring. Your article made me feel strange and fascinating it attracted me. I wanted to share this information with my friends on the social network facebook.!
Huz Games , Kizi hot