Pah. Tossed out with the rest of the garbage. The nerve! At least you have your freedom, though once you see what's ahead in this surreal world of shadows and machines you might want to go back to the junkyard. Badland is a one-touch action game from Frogmind that's sort of a cross between an endless flying game and a platformer. It tells a charming story without using a single word, expressing a range of emotions using little more than clever level design and plenty of beautiful, beautiful artwork. 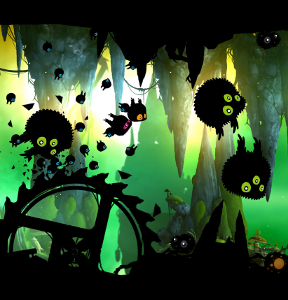 You control a fuzzy fly character by tapping and releasing the screen, holding your finger down to fly higher and letting go to drop. The basic plan of avoiding dangerous things is always in play, but the terrain introduces a lot of obstacles that can speed you up or slow you down, such as fans, tilting platforms, sticky cockleburs and exploding... plant... things. You're not alone in this strange world, though. Badland drops power-up pods that do things like increase your size, shrink you down, speed you up, or even spawn a bunch of friends. The way in which the game plays with these power-ups is almost magical, and as you flap through the levels, you'll honestly feel some excitement about what could be waiting for you just around the corner.

Badland is one of those games that comes together without a flaw. It's easy to pick up and play and offers a lot of variety and challenge later on. What will really hook you is the oh-so charming artwork and characters, especially the little touches like shadow animals observing your progress from the background. When you combine artwork as beautiful as this with simple, addictive gameplay, you absolutely can't go wrong.

Brilliant game. Absolutely love it. Spot on review too. I love these funny flying things! (And I feel bad about all those I lost - sorry little ones)