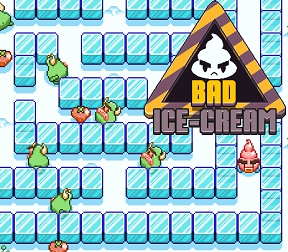 I've always thought that ice cream must feel a little depressed around the holidays. For a good half of the year, it is the unquestioned king of desert and queen of dairy. However, round about October, the trucks that delivered it to neighborhoods amidst the dulcet tones of "Turkey In The Straw" fall silent. The shops that once sold it in more than fifty varieties close their shutters. Worst of all, though, ice cream finds itself replaced in our hearts and on our tables by all manner of thematically-shaped cookies, pies, gingerbreads, fruitcakes, and nogs. Well, the stars of Bad Ice-Cream, Nitrome's new top-down arcade puzzle game, are three dollops of frozen dairy that are mad as heck, and not going to take it any more. They're rebelling the only way they know how: collecting fruit and spitting ice cubes. Are you a bad enough ice-cream to claim the season back?

In Bad Ice-Cream, you start by selecting whether you shall play as chocolate, vanilla, or strawberry, and if you'll be player with a second person. For the record, I like me some strawberry, and while I'm not a big fan of sharing the keyboard, I'm glad the options are there. Guiding your heavy-browed ice-cream dollop using the [arrow] keys, the goal is to collect all the various fruits on the level, one type at a time. Hitting the [spacebar] will cause your dollop to breathe out a straight row of ice blocks, or destroy an already created row if you're standing next to one. Various baddies, including stalking monsters, rampaging bulls, searing flames, ice-breaking squids, rolling logs, and tunneling triple-scoops, will attempt to cream you into a puddle of goo. Ice blocks and quick movements are your only defense. Stay frosty and see if you can avoid a meltdown through all forty levels!

Don't let the cheerful pixel graphics and chirpy music fool you: Bad Ice-Cream is no helping of soft-serve. After a few underwhelming opening levels, the difficulty curves ramps up: It becomes unforgiving around level 25, and frustrating around level 30. Generally, though, I would call the difficulty fair, though the slight isomorphic tilt to the perspective can make it difficult to place which line of the grid enemies are on, leading to some cheap deaths. Also, the later levels rely a bit too heavily on fruit that moves randomly around at speeds faster than your character can manage, which feels a little cheap, especially when you think you're racing the clock. (To be clear, the clock in the corner of the game window is solely for bonus points, something that I wish had been made clear in the instructions. Would have been a lot less stressful.) That said, there are some clever level designs: some relying on quick movement, some on proper ice block placement, and some on figuring out enemy movement patterns and using that to your advantage. I especially liked level 20, whose recreation of Pac-Man into Bad Ice-Cream's own mechanics make for a nice twist on an old favorite.

Those gamers who aren't turned off by Bad Ice-Cream's cuteness, might be by its difficulty. However, if you're looking for an challenge, and are open to adorableness not precluding being-tough-as-all-get-out-ness, you'll find Bad Ice-Cream makes a very nice sundae.

Thanks to Jordan, Alan, Tobie, and Tom for sending this one in!

bad ice-cream is an amazing game dude.I finished the whole game in two days. Nitrome games are good. They fantastic games. Carry on your brilliant work nitrome. You are a legend in browser gaming.

I'm going to go out on a limb and guess you're not a New Englander, Tricky? Ice-cream is a year-round treat in the cold Northeastern U.S.

Oh gosh, some of these levels are just so unforgiving. Several had like insane amounts of enemies. Nevertheless, I liked it, especially level 36. For me, it's all reminiscent of Square Meal.

You'd be correct, though I do have a Maine-based uncle who has a cone-a-day Dairy Queen habit year round. However, considering that my local ice cream shop, Sciarelli's, to whom all other ice cream is but a pale imitation, is only open for the warm months, I stand by my description. :-)

One little thing that bugged me was how the ice cream defaulted its direction down whenever I breathed out the ice. I kept having to redirect myself when I wanted to rapidly break and make ice blocks, which got me killed more than a few times.

Other than that, great game.

I agree with marcmagus, Ice Cream is a year round treat. Well, maybe I'm just saying that because I too live in northeastern U.S. Well, anyway, this game was good, I beat it without TOO much trouble. For an entertaining, Christmas/Winter themed game, I give this a 3.5/5.

Very odd that you Northerners have ice cream year-round. Now, me, I'm in Houston, TX - Yesterday, our high was 73, and today the high hit 54. Tomorrow's going to be in the low sixties, and then we're expecting to be in the high seventies by the weekend. Ice cream is a 365 deal - including the ice cream truck - because that blasted Gulf of Mexico keeps screwing up our weather patterns, so you never know if it's going to hit the 80's in the middle of January and leave your clients desperate for a cold treat. I remember getting Baskin Robbins last Groundhog Day...

Loved this game. The ability to shoot out ice and break it felt like a super power.
I loved trapping enemies in ice enclosures then completing the level, its insanely fun to watch them walk in squares.

Does anyone know how to do level 27? I'm having such a hard time with it.

This game is so reminiscent of all the good old Nitrome classics...Thin Ice, Hot Air, Frost Bite..it was great! The difficulty was just right, some levels needed thinking out but none were frustrating.
Oh, and I really like those grumpy expressions on the ice cream scoops!

@Solatoral-
Have you tried sealing in each monster with a single cube before they break out at the beginning? Do that, break all the other ice cubes and then run around for the fruit. Clearing paths before you collect the fruit helps because you can avoid the monsters pretty easily when they finally do escape and start chasing you. Good luck!

I thought there'd be a cool ending, but alas there was none. Still looking forward to the next proper Nitrome game. The one they hinted at in the blog

Like it! Stuck on level 27, though. How are you supposed to maneuver safely in a very small space with two of those monsters that can shatter ice?

Hello everybody, can someone help on this game bad ice cream I don't know how to finish the level 34 it's too hard to do.

Fun game. The last level was insanely easy though.

i hate it cause when i break the ice it changes direction and i screw up.but overall good game 95/100:D