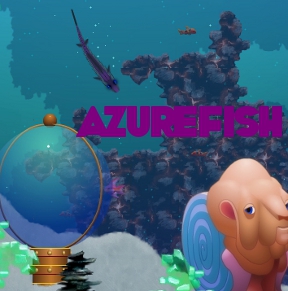 Despite Disney's best efforts, there is nothing in this world that can make me think being under the sea is anything short of terrifying. I mean, do you watch the Discovery Channel at all? More than half of the meanest, strangest, biggest, most deformed and poisonous/fanged creatures in the world live in the deep blue sea. Still, I have to admit that Lucas Paakh's underwater exploration-oriented Azurefish manages to make the ocean look pretty spectacular, and packs it full of minigames, secrets, and achievements to boot. You play a fish (decidedly azure in colour... go figure) swimming through a vast ocean; just move your cursor, and the fish will follow it. The basic gameplay may remind you of Paakh's previous title, William and Sly, albeit without any sort of story or real goals; your only real objective is just to explore the large underwater map, hunting down treasure, performing acrobatic tricks, and more.

Azurefish isn't just story-lite; it's story-free. It winds up feeling a bit more like an elaborate webtoy that takes cues from both Ecco the Dolphin and Dolphin Olympics, only without the dolphin. While some players may be put off with the lack of any real direction or overarching mission, there's something to be said for just going with the flow and immersing yourself in the beautiful environments and atmosphere. It's not that there aren't things to do; hunting down tokens, or gems to play games like races or acrobatic tricks, is a lot of fun. The presentation is gorgeous, rendering the sea in rich colours and surreal touches that would almost make me think the ocean is a lovely place to visit if not for the fact that I know what sort of critter lives down there.

Of course, even taken solely as an adventure in the life of the world's flashiest fish, there are a few quibbles. Control feels (perhaps appropriately) slippery at times, since long, floppy-bodied fish aren't typically known for their ability to execute hairpin turns. The real issue for players trying for 100% completion may wind up being that trying to navigate to the myriad of items tucked far behind scenery in little crevices winds up being more trouble than it's worth, since you can't see where you are or where you're going. Still, Azurefish is absolutely beautiful, and packed full of wonderful detail and surreal touches that make it a lot of fun to spend time with. It's relaxing and engrossing and should provide a tasty treat to whet your appetite for certain sequels about certain foxes which could be on the horizon if you've been good this year. Until then, keep your feet wet and dive on in.

The only thing I don't really like is that there are about five gold coins I can't seem to lay my flippers on. That and the fact that swimming away from the Catopus-things after having spent a gem makes you lose the gem (well, not the racing catopus).

It's beautiful, and I love that about it... yet it felt a bit claustrophobic. The one thing I liked least about William and Sly was trying to reach the goodies hidden in dark caves and searching for secret routes to the goodies; William and Sly had more gameplay than that. Azurefish seems to be almost all about finding those goodies, so I gave up quickly. The time I did spend playing was enjoyable all the same. I hope to see more titles by Lucas Paakh.

I don't get it. Why is 1/3 of the gamescene hidden behind plants and caves? I understand a few secret places, but this is waaay too much of a good thing. Half of the time, you have no idea where you are or which way you can move. That makes an otherwise somewhat nice game terrible. In my opinion. :)

Jump through the purple hoops in the air. This was the first one I found, and it was rather intuitive. Can you jump? Yes. There are hoops to jump through? Then try it!

Find the pipes with wheel valves, spin the wheels until the pipe opens. Also intuitive, especially if you have sound on so you can hear the clicking as you swim by the wheel.

It took me forever to figure this one out. I'd noticed that I'd run into a round fish now and then that would be batted away if i swam into it. I did not notice that it gets larger after doing this, nor did I ever bother to hit it more than once or twice. Finally I decided to look at the achievement list, and at that point I realized this must be what gets the blue particles.

Totally lovely to play! Love the music, the atomsphere, the games... all of it!

I am really having trouble with the acrobatics challenge. I'm driving myself crazy.

This a beautiful game though. :D

This game has excellent controls and it is beautifully developed - definite fun to play.

Graphics are utterly beautiful. And, sadly, if ever there was a game that demonstrated that a game needs more than beautiful graphics, this was it.

Of the "things to do", they boil down to Collect all the X, where all the X are hidden behind bits of scenery; or play the three challenges, where in order to replay any one, you have to swim around doing repetitive tasks. The challenges themselves were quite fun - I don't like races particularly, but the other two were fine.

It's a lovely setting, but there basically isn't anything interesting to do there. The balloon fish are so cute...

I don't want to have to pop them!

I don't know about you, but I got slightly dizzy while playing it, maybe it's just me...