Goody Gameworks blends action and defense in Arc of Templar, a game about purging evil from a castle by filling demons full of lead, and dropping the odd chandelier on them. To play, use the mouse to aim (you'll fire automatically), and [WASD] or the [arrow] keys to move around behind the barricade, keeping the demons at bay. You can activate special skills with the number keys when they've cooled down, and stepping on triggers behind the wall can activate traps when available. Slain enemies drop experience points, and when you level up, you can choose to enhance your Templar's abilities, or gain a new power altogether. You'll also gain heroes who will fight automatically to keep enemies at bay... don't worry if they get knocked down, they get back up again! (Sorry kids, that's as current a reference musically as you're going to get out of ol' Auntie Dora.) Just watch out, since if they get close enough, enemies can target you, too, and if you get taken out, you'll have to try the level again. 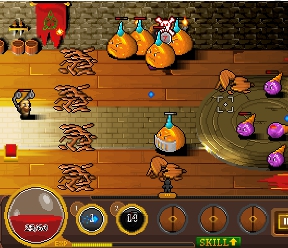 Like all of Goody Gameworks' titles, Arc of Templar is cute as the proverbial button. The sprites and pixel artwork look great and have a ton of character, while the gameplay manages to be simple and fun. This isn't the first time they've tried a spin on the defense shooter genre, but the downside is it's hampered by some shoddy AI, which makes your computer controlled teammates inefficient meat shields at best, especially with the lack of a really precise positioning system as opposed to the slider. It gets grindy just a wee bit too soon, which may put off players who want to get by on skill, rather than how many levels they've been able to sink into skills. If you don't mind a bit of an uphill climb, or even prefer a game that makes you dig your heels in, however, Arc of Templar is a solid and unrelenting little defensive shooter that you can roll up your sleeves for.

I guess it has some potential maybe, but the control style really doesn't do anything for me. Clearly I'm supposed to aim and partially direct the captains with the mouse.

But then I'm supposed to move and fire using my left hand, trying to make sure that I move between the number row and the WASD keys without missing, because woe betide you if you slip. Or am I supposed to use the arrow keys with my right hand to move so that I can keep my fingers on the triggers - but then have to decide between moving and aiming? Or maybe grow a third arm? Then I can use one hand for firing, one for moving and one for aiming... That's probably easier.

Short version: Controls feel awkward enough that I can't tell if the game could actually be fun. And I'll play almost anything, even complete grind-fests.

I agree with Vetala, there's no way to aim, move, AND use a skill on the fly without a lot of awkwardness that will inevitably get you killed once the enemies that can shoot past the barricades show up. I made it to the second area before I gave up as the mortar guys started to set the floor on fire in addition to that.

I was going to comment that the controls seem a bit chewy, but it looks like that's a already the consensus. Nice game otherwise!