Alone in the Cosmos

Space is called the "Final Frontier" for a pretty good reason. Turns out it's scary up there. Kind of lonely, not exactly a vacation destination. And guess what? You're stuck there. Box Rocket Games' new title, Alone in the Cosmos, is a somber and short little interactive art game following an astronaut who's been living in isolation among the stars for some time now. It's your job to explore your moody space station by clicking with the [mouse], discovering a bit about how and why you've become trapped in orbit for so long, and what you left behind back on earth. Bring some tissues. Things are about to get existential. 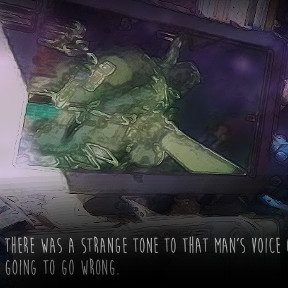 Fair warning: short means short. You can blast through Alone in the Cosmos in mere minutes, and the path forward is pretty straight for the most part. This is a game about mood and emotion rather than puzzle solving. You have to discover each memory fragment before you can use the escape pod, but they're not exactly "hidden" so much as "spread out". Think of it more like a short story, a piece of interactive fiction that explores the protagonist's degenerating mental state. The art style is a jumbled, chaotic sampler platter of woeful dinginess, a wonderful reflection of the isolation that comes from being trapped alone in the void for so long. And the music does a fine job conducting your emotions. It's a journey that you're on here, and Alone in the Cosmos is one emotional ride.

Play Alone in the Cosmos

Wow, now that is lonely. Just a blue star-filled page.

Strange, I got it to play just fine. Latest version of Google Chrome on Mac OS X 10.10.3; what about you?

Wow, that was a pretentious nothing. Glad it was so short.

Wasn't my scene, but it gives me a chance to complain about something - serious games that have those godawful Newgrounds MEDAL GET!!! popups. This game didn't really grab me emotionally so the popups weren't too disengaging, but man do they ever stand out on a game that you're invested in. Playing With Letters from a little while ago is a good example, the obnoxious popups totally broke the tension.

The writing in this game is truly awful: mixed metaphors, metaphors that don't actually make sense and overwrought, cliched phrases most often used by 14-year-old poets.