Once upon a time there was a cute little bunny born with a tendency for uncontrollable behavior prompted by intense acid flashbacks, the latest of which has resulted in Mr. Bear's decapitation. Fortunately, all he needs to revive Mr. Bear is a needle and thread. Unfortunately, Acid Bunny's bunny brothers are out today making trouble, and you know they won't make things easy. Acid Bunny from Seething Swarm is an action-platformer that revels in offensiveness, almost as if its ashamed of the adorable heart beating underneath. Please be aware that this game contains material many would find offensive, including drug use and suicide. 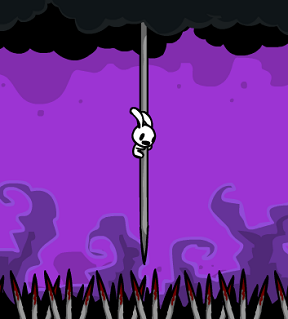 Move, jump, and double jump with the [arrow] keys, exploring the world around you, collecting the 24 spools needed to resurrect Mr. Bear. There are enemies to be bopped, or your can throw carrots at them with [A]. There are various vehicles and items you can ride, which you'll enter automatically, using [S] to dismount. There are also mushrooms to collect, which will allow you to see the magical portals that will take you to bouncy minigame land... There may be some subtle symbolism there.

The opening cut-scene of Acid Bunny has a level of pitch-black humor to it that would make even Jhonen-Vasquez-on-a-troubled-day say "Man, that got a little dark". Frankly, it seems a bit of a miscalculation going for so much shock value early on, since what follows is a quite creative open-world to explore with a good amount of collectibles, minigames and puzzles to interact with. Yeah, you'll still be bopping the head of the occasional pill-popping fellow bunny, but at least it won't be quite so friggin' bleak. Still, while only those looking off the beaten path should take an Acid Bunny trip, they'll find it well worth the ride.

As a JTHM and Filler Bunny fan from way back I have to confess I loved and laughed at the opening sequence. How could you not? I think "drug addicted baby bunnies" is my new favourite line. This is no more disturbing than Happy Tree Friends.

The controls and transitions are kinda wonky, but the grahpics, music and story make up for a lot. Pretty good, all in all.

Is there more than one psychedelic 'mini game' mushroom?

JCFClark, each of the four areas (park, town, forest and underground) has a mini game mushroom and a minigame target. They'll respawn after you perish, even if you've already completed the associated minigame and unlocked an album picture.

The opening cinema seemed a little too lengthy for my tastes - the story could have been told in at least half the time, if not even less. Make it shorter and punctuate it with some funny images or carefully timed jokes.

The game itself feels pretty standard for low-budget flash platformers. There's some wonkiness to the hit detection, and it's easy to miss your jumps because you hit the edge of platforms or the ceiling.

The photo album, on the other hand, is pretty clever. I like the mixed media, and it shows an unusual level of effort. I would've liked if the album told a little story, rather than just showing a variety of disconnected images.

I was expecting the game to be more of a linear adventure that subjected the player to weird acid trips that transformed idyllic landscapes into hazard-strewn obstacle courses. As it stands, the "Acid trips" only seem to be plot devices and figure minimally into the game mechanics. There's some potential here to surprise and astonish the player with some weird, dark twists to their platforming adventure.

This is competent and shows potential, but lacks a lot of polish. Hopefully the developer uses what they've already done and learned and works to improve the sequel with better handling and hit detection, and experiments a little more to make the hallucinations more central to the game.

Thank you SirNiko for your review :)

No save makes sad panda.

I agree with Tobberian about the 'no save' feature. Sometimes one cannot spend the time required to finish a game and thus, depends on an option to save. It's discouraging to have to re-start when a lot of time has already been spent trying to beat a game.

ok. this game is fun.

I do admit the 'little girl voice' giving the narative was creepy, but then i laughed and it was good.

Is anyone else missing one of the spools of thread? I'm stuck at 23/24 and can't find the last one.

CJTressler, I'll bet it's the one in the Town.

Get on the second level, swing on the swing, rock yourself to get up speed, then jump to the right.

IF that's the one you're missing!

can anyone name the music in the game????