Voting is now closed. Results are up! >>

Tell you what, if Charles Dickens had had all the awesome games that came out this past year, his work would have been a darned sight cheerier. After all, how can you not be excited when you have games about uncoordinated unicorns, random fire hazards in space, stories as currency, ponies with a passion for dental hygeine, and kitties that force you to confront the harsh inevitability of death?

... okay, so maybe they haven't all been cheerful, but 2012 was yet another chapter in gaming excellence, with developers new and old getting together to create things solely for your entertainment. Which is pretty rad when you think of it, considering how much of it was free! And what better way to thank those tireless folks than to vote for your favourite game to win top prize in each category in our Best of 2012 awards? That's like a fistbump, a high-five, a bro-hoof, and a verging-on-creepy hug all in one! 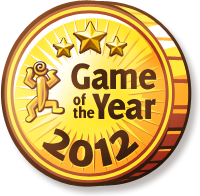 From now until January 23rd, you can vote once each day in each category on what game you think should stand above its peers, as well as once daily on the game you truly felt was the creme de la creme and deserves to be crowned the single best game of 2012! For Game of the Year 2012 voting, and just like last year, simply check the box at the top of the page above all nominations before voting in that category. It will look like the example below:

We've done our best to pick the top games in each category based on everything from community opinion to our own old-timey boxing matches. (Winner gets final say, and a free jar of handlebar moustache wax.) From browser to mobile, from indie to casual, 2012's best and brightest are here for you to judge, so get clicking!


Here are the categories:

I may need to go through again, but I'm a little surprised I didn't find Paladog in both the mobile and browser categories (did I just miss it in mobile?). One of my two fave games of the year! I doubt a DL game can win "Game of the Year", but if there's one that deserves it, it's Defender's Quest. Also very excited to see my friend Barb's game, Game Over Gophers, nominated in the Defense Strategy category. I love Best of!! Good luck, game devs!!

I feel honored to see my game nominated! Thank you, this means very much to me :)

How is Thomas Was Alone not on this list? That game was beautiful!

Sorry. Never mind. It is.

I've been looking forward to this. :)

I can't contain myself,
I'm rooting for "The Dark Room" in Experimental
A must play for anyone with a dark sense of humor. (I even got my grandmother to try it. XD)

That's awesome, Ruesikin! I'm going to try it on your recommendation. That's one of the best things about "Best of"--it shows me what I've missed during the year.

I'm surprised Hotline Miami didn't make the cut! It was my favorite action game of the past year without a doubt (in terms of sheer fun, intensity, and warped retro style). A fair story with some twists and a killer soundtrack. That soundtrack! Anyways, I always love this time of year, and will be interested to see what comes in 2nd place...

That was definitely a mistake on our part, and I'm unsure how that happened. All I can say is this Best of the Year awards is a huge project for us as we sift through literally thousands of games that we featured over the year, and somehow Hotline Miami fell through the cracks in the system and got lost.

Anyways, it's in there now, in the Action or Arcade category for Indie games. Thanks for bringing it to my attention.

Hi Ali Alii! We have never covered a game called Kung Fu Rabbit, which is why it is not on the list. :) This voting is only for games we have actually reviewed and featured. If you feel the game is something we should review, please feel free to use our game submit form!
https://jayisgames.com/game-submit/

Thank you for believing we're the best games site! We think so, too. :)

The logic, as we see it, is that each game stands on its own regardless of how long it took to develop it, who developed it, or how many games the developer puts out in a year's time. The best game overall the others in each category should win our awards, and I do not believe spending more time making a game necessarily makes it a better game.

Rovio has 4 games in mobile physics? I don't think it's fair to other great quality games to introduce famous games with huge fan following. Sure they're good quality, but I wouldn't be suprised if Cut the Rope and Angry Birds Star Wars win their categories just because of their big fanbase...

I believe most of the people who visit this site are discerning enough to vote for the best game in each category rather than just voting for the popular games. That said, popular games usually get their popularity from being good games.

Regardless of what may seem fair or not, the truth of the matter is that all games compete for the same eyeballs and attention, and our Best of 2012 awards mirror that playing field. We should all do our best to ensure that the best games win in each category.

We want the results!

I need 1 extra day to finish everything up. Look for results first thing Tuesday! :)

So, are we not going to get "Best of 2013" because of the financial troubles or…?

A "Best of" is on the way, and the delay has nothing to do with finances (I'm not sure how that would even impact the feature?) and everything to do with someone learning all the coding manually for the first time since Jay handled all of it himself before the sale. :)