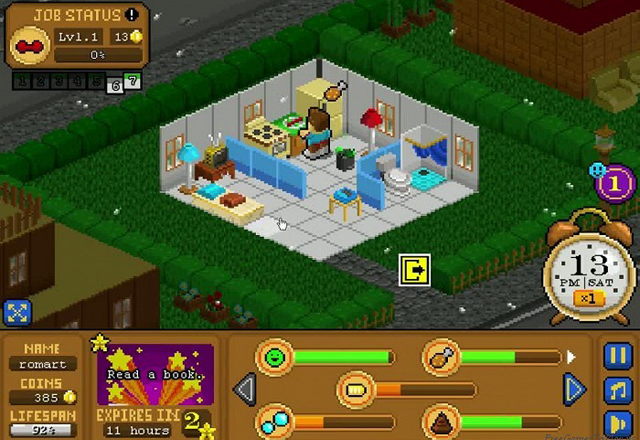 You have only a few in-game days to create your life and a foundation for your future family. Your career choice now will affect your descendant's aptitude for athletics, academics, and creativity later. After your character dies, the "value" of their life will be analysed and you will start the game over, with improved stats and wealth. This concept, which sets A Goody Life apart from other simulation games, is similar to the game Viktor the Nth. Interestingly, A Goody Life incorporates investing in antiques, and Intelligence and Creativity can be raised by using The Internet.

In this game you can make a couple bucks by clearing one dish from a table at the local cafe. Plus, you can bathe and poop in the park without being charged with indecent exposure. All of your fantasies come true, without the negative repercussions! While you're living your dream of sleeping on park benches and doing stand-up on weekends, you might get a bit hungry. Simply pop on over to the aforementioned cafe and eat patron's leftovers: It's A Goody Life for me!

A Goody Life will definitely fill your craving for simulation and time-management games. It has many aspects that are clearly like The Sims FreePlay. It may also cause you to have an existential crisis and realise that life is easier if you have wealthy parents. At times, this game is too real.

My Cons: • No character customization, only a male avatar.
• The instructions for the minigames are unclear.
• There are a few details which make little sense: ie., why does my character never physically age, when characters in this world clearly can?
• The game warns you two days in advance of your death. The player then wanders about to pass the time, just waiting to die, which can become dull later in the game. Perhaps there should be an option to skip directly to your death, which only becomes available on those last two days?
• The grand goal of having your family registered in Goody City doesn't make much sense. Still, the game was engaging enough to entertain, even if it was somewhat nonsensical.

Anyone else find that the end goal is not really worth it? I mean, I got to register the family after 1 life!

And nothing happens when you're registered. I mean, you don't gain everything except a game over screen that makes one think there will be no more incarnations :\

Perhaps a longer term goal, the keys to city or becoming Major or having the City change to your name or something... But something that requires a good 5-10 reincarnations.

Fun all the same.