Do you feel a hollowness from the removal of an infamous flappy bird? Do you miss the echoed cries of rage from bouncing off of screens from Android and iOS users alike? Even with the rampant clones, like the wonderful flapbound, is there just not enough frustration in your day without the repetitive tapping on your screen? Well, want no more Android users for Play.im has your solution with CrazyBox (now available for browser, too!)! Tap the little box through obstacles, around dangerous lines, and solve puzzles to reach the always desired dotted line across the screen. A high-difficulty avoidance game that can stand its own against the out-of-control little bird and make a name for itself. 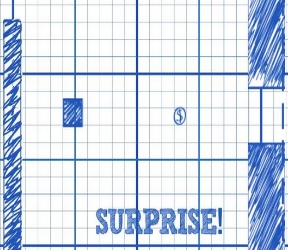 Pressing on your screen sends the little blue box up. The longer you hold, the farther and faster up he goes. However, anything longer than a mere tap is going to be treated with instant death. But this game is more than just timing. Each level has something different, more tricky, and sly than the last. Whether it's reversed gravity, sudden lines to dodge, or coins to gather in order to open the door wider, there are always more tricks to keep the game interesting. Success in this game is more powerful than in Flappy Bird, as the goal isn't to just have a number to brag about, but levels to finish. The game was released with 25 levels, but is now up to 47, so we can safely hope for more to be added.

CrazyBox is a very simplistic game in style, but the blue inked scribbles on lined paper are so charismatic, as well as the sound effects. The little 'pop' you make when your little blue box explodes into bits eases some of the anger of dying again against that horrible blue wall. The only issue with the beautiful but bare bones design is confusion on what you can touch and what means what. Dashed lines are safe, in a manner of speaking, just marking the areas where changes will occur (such as invisibility or reverse gravity.) While solid lines kill you with even a gentle brush against them, unless they are more solid, shorter, and less scribbled which mark portals. A little confusing and the first time encountering a new line will probably result in your death counter going higher, the death counter is a lovely addition to any rage game and CrazyBox goes a step above that by adding the average death per level counter, though sometimes the math can be faulty. This small issue aside, CrazyBox is surely a game that you'll find yourself vastly addicted to and all of us android users can feel pity for anyone with an iOS.