Nightmares from the Deep: Davy Jones

Before he was a tentacle-covered sea captain in Pirates of the Caribbean, Davy Jones was little more than an obscure legend. But Professor Black, undaunted by her previous maritime misadventures, is determined to unveil his true identity. At the start of Nightmares from the Deep: Davy Jones, the final act of Artifex Mundi's exciting hidden-object adventure series, she is about to reveal her exciting findings when Davy himself bursts in and kidnaps her and her daughter Cory. Time to walk the plank, Professor! In order to save her mother, Cory signs a pact with Davy Jones, vowing to be his maid. She is taken to his cursed island, where she joins a multitude of other unfortunate souls,now mostly skeletons, who have signed their freedom over to the dreaded pirate. There is only one way to end the pact, but no one remembers what it is, so Sarah Black must unveil the ancient secret in order to free them all. Luckily, the skeleton slaves are quite helpful, and thoroughly endearing with their colourful accents, and she finds out that she'll have to wake up the twelve guardians of Davy's memories who hold the key to his darkest secrets. 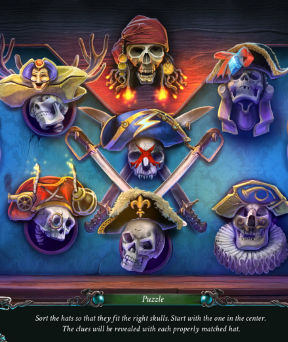 As in the first game, The Cursed Heart and the sequel, The Siren's Call, Sarah will encounter many challenges in the form of interactive items, puzzles and hidden-object scenes. The good people at Artifex Mundi have outdone themselves this time: they have made sure that the mini-games are well made, challenging and pirate-themed, and the hidden-object scenes are varied and more entertaining than you could hope for. There are also two interactive maps to lead you through the island's labyrinthine buildings – just don't forget to switch between them when you receive the second one.

Nightmares from the Deep: Davy Jones is certainly a worthy ending of an excellent series. It's always satisfying to see villains who are more than one-dimensional boogeymen, and our Sea Devil Davy undergoes quite a bit of character development as you uncover the pieces of his long-forgotten past. Of course, a tale of lost souls and cursed treasure deserves a fitting atmosphere, and this game has it in spades. It can be difficult to combine a dark, brooding background of sunken ships and dark towers with the vibrant colours of corals and tropical flowers, but it all clicks wonderfully. Lots of different influences, from steampunk to voodoo, add to the enchanting beauty of each and every scene. The ensemble of the supporting characters, with their individual stories and great voice acting, fill Davy Jones's forbidding world with life (even though they are sort of... dead) and serve as a welcome comic relief. It seems as though every detail was crafted with care, from the storyline, to the visuals and music, and the result is a wonderful adventure you won't want to miss.

Nightmares from the Deep: Davy Jones is currently only available in a Collector's Edition, which includes a bonus level, concept art, wallpapers and more. Remember that Big Fish Game Club Members pay only $13.99 for Collector's Editions (or 2 club credits), and collector's editions count 3 card punches of 6 total needed for a free game.