A New Beginning is a classically-styled adventure game from the well-respected Hamburg-based publisher and developer Daedalic Entertainment. With A New Beginning, the team has created a great-looking game that's billed as an "eco thriller", two words you wouldn't necessarily want associated with each other. But halfway through the prologue, you'll realize Daedalic pulled it off, as A New Beginning successfully combines socially aware environmental messages with a smart, puzzle-driven storyline. 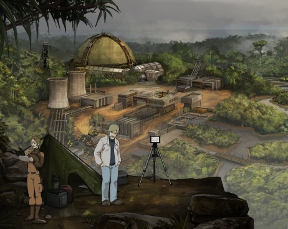 The game begins innocently enough with Bent Svensson, a mustachioed retiree fiddling about his cottage wondering why his life has lost all purpose. Bent was a researcher in the field of algae-based alternative energy, but his work took over his life and left him lonely and somewhat bitter in the end. While attempting to repair a machine outside of his home, a helicopter lands and out steps a woman, Fay, who claims to be from the future. Naturally, Bent is skeptical, especially when she claims he could be the only person who could save mankind from a terrible future of environmental disasters.

The first portions of the game skip back and forth between Fay telling about her adventures in the future, which you get to control, and checking in with the present day to see how things are progressing. It creates some very nice cinema-style interruptions from time to time, where Bent breaks into Fay's story to cast doubt on the decisions you make. Eventually, your goals shift and the real adventure begins, convincing world leaders that Bent's alternative energy is a viable solution to the fuel crisis.

A New Beginning's story and characters take central stage, but the puzzles are smartly designed and do a fantastic job providing challenge without breaking away from the plot. As is with traditional adventure fare, you'll be given a small handful of scenes to explore at a time along with dozens of things to look at, examine, pick up, use, and investigate. Travel back and forth, solving puzzles to push open new areas that allows the story to progress. It's entirely organic, and you never really feel like you're just moving from point A to point B so you can tick off a list of puzzles to solve before getting to see how the story progresses. 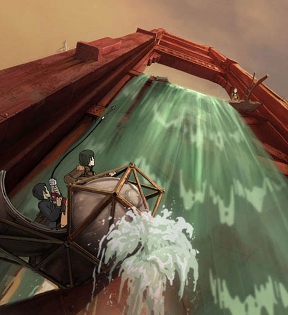 Analysis: A New Beginning continues in the tradition of smartly-built adventure games that focus on story and puzzles instead of mini-games and other gimmicks. The style is decidedly retro, but the controls and interface are well-suited for modern players. Shortcuts, faster screen transitions, and point of interest highlighting are some of the features that make it perfect for anyone who loves adventure games but might be put off by the size and complexity of them.

The controls might be unusual to those unfamiliar with many adventure games, but they work well and manage to stick with a few convenient buttons for every action. The mouse is where it's at, and you'll use it to move, examine things, and interact with the inventory. Click and hold on things to bring up a small menu that offers you a choice of actions, such as looking at an object, using it, or taking it. Press the [right] mouse button to open and close the inventory, and remember you can click and hold on items stashed there as well. Also, if you're stuck or just don't want to flail the cursor all over the place, tap the [spacebar] to highlight all points of interest on the screen.

A New Beginning features over 50 voiced characters, and for the most part, the actors do a great job playing their roles. There are some stilted lines and awkward phrases, but nothing that would pull you out of the game. A few of the plot points feel overly dramatized, bumping up against the feared preachy side of some environmentally-themed games. But again, everything is handled with aplomb, as Daedalic knows how to write a good story!

It's a beautiful adventure game with lots of hand-drawn art, comic-style cutscenes, interesting characters, and a plot you can actually care about. And with at least 20 hours of gameplay, you won't feel sleighted when the credits start to roll. A New Beginning is a superb release that expertly captivates from the prologue to the final chapter!

A New Beginning... Very appropriate for the first review of a new year! Downloading it right now =)

Heh, I didn't even think about that! It's a very worthy game, I completely fell into the story and thought it was wonderfully told. The puzzles were great as well, just enough difficulty to make me think, but never too obtuse.

Very good game. Science was a bit sketchy on the algae, but that turned out to be very unimportant. (Not saying more so as not to spoil the ending.)

Loved the after-credits moment, looks like there may be a sequel forthcoming.